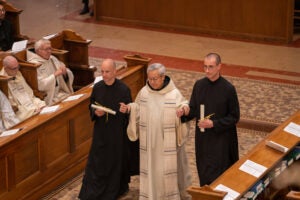 On the evening of September 8, the Feast of the Nativity of the Blessed Virgin Mary, the monks of Mount Angel Abbey gathered in Mount Angel Abbey’s church to celebrate the Mass of Simple Profession for two novices, Brody Stewart and Fr. Jack Shrum. The novices professed vows of obedience, stability, and conversion of life for a period of three years.

At the beginning of the Mass, the novices processed in with the altar servers, concelebrating priests, and Abbot Jeremy Driscoll, OSB, principal celebrant. 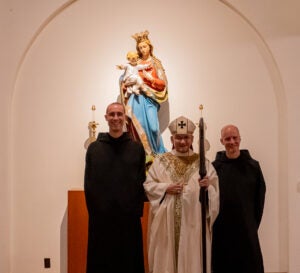 The congregation filled the church and joined the monks in song and prayer, interceding for the men about to profess monastic vows.

During the homily, Abbot Jeremy addressed Br. Brody and Fr. Jack, saying that “what you do shows us with clarity and as a witness
of what we are all meant to be in Christ Jesus.”

After the homily, the two novices knelt before the Abbot and made their first monastic vows, signing their profession documents on
the altar, and displaying them to all gathered as witnesses of their promise. The newly professed monks also announced their new monastic names, signifying putting on the “new man” in Christ. Brody Stewart is now Br. Ambrose, OSB, while Fr. Jack Shrum is now Fr. Michael, OSB. After the conclusion of Mass, everyone gathered for a reception and to congratulate the new junior monks.