The pipe organs at Mount Angel Abbey, were built by the Martin Ott Pipe Organ Company of St. Louis, Missouri. The Choir organ and Grand organ are mechanical-action instruments designed and constructed according to classic German organ building principles. Both of the organs, built in this way, exhibit the following principles and characteristics:

Both organs employ mechanical, or “tracker” key action. This is a mechanical linkage between key and pipe valve, so that depressing a key at the keyboard moves a direct assembly of “trackers,” “levers” and “squares” to the valve beneath the pipe’s speech, becoming an extension of the organist’s fingers. The action is particularly sensitive to “legato” and “staccato” articulation, as well as to the style of release. It is precise, fast and gives instant feedback to the performer. The performer’s fingertips have direct control of the opening and closing of the pipe valves. This type of key action has been proven over the centuries to be very reliable.

They employ “slider chests,” with pipes of the same note within each division standing on a common wind way, called the “wind channel.” Because of the wind channel, the slider chest produces a cohesive sound, enhancing the blend and ensemble of the instrument. The channel and valve (pallet) allow a gentle entry of wind into the pipe, enhancing pipe speech and tone.

They exemplify the tonal ideas and voicing style developed during the past twenty-seven years since the company was founded, imparting clear, transparent texture to the sound. All of the tone families (principals, flutes, strings and reeds) are represented in the tone choruses.

They employ casework: a wood encasement of all divisions encompassing the entire instrument except for the front, where the tone projects out of the case, and directly to the listening area. There is no muffled or indirect effect due to chambers or off-center position in the room. The case blends and projects tone, adds richness and resonance, and protects the instrument. The instrument, so placed and within a free-standing case, can speak to the listener with a light, unforced singing.

These pipe organs were designed specifically for the acoustics of the Abbey church, both in its choir and in its nave areas. As with any well-designed pipe organ, these instruments are unique both architecturally and tonally. Their main task will be to accompany the monastic choral singing along with the full church’s congregational song using the rich musical tradition of the Benedictine order.

The stop list was developed by Ott Pipe organs, in collaboration with the Abbey’s organ committee. The pipe scaling was determined by Ott formulas.

The organ cases were designed by Ott Pipe Organs with consultation from the architectural firm of Humayun Somjee and Associates, St. Louis, Missouri. The intent was to integrate the designs of the organ with the architecture of the church. The cases are built of white oak and are stained in a light brown color. All wood used was kiln-dried and milled in our St. Louis shop.

The framework utilizes mortise~and~tenon construction. The raised panels in the case design are all made of quarter-sawn oak. The facade pipes, made of a polished 75% tin and 25% lead alloy, come from the Prinzipal ranks of pipes and are functioning or “speaking” pipes.

The manual keyboards have 61 notes; the natural keys are of grenadil wood, and the sharp keys are of grenadil covered with cow bone. The pedal keyboards have 32 notes; the keys are of oak, and the sharp keys are capped with ebony. The mechanical key action parts are made of wood; the trackers are made of western cedar and the squares of white beech. Rollers are of metal. The wind chests are constructed of Baltic birch plywood, ash and maple. Each organ has one blower motor for wind supply.

The stop and key action are mechanical. There are a total of 856 pipes. All pipes with the exception of the Prinzipal 8’ and twelve pipes of the Subbass 16′ are under one common expression control. The organ has a common Tremulant (prepared). 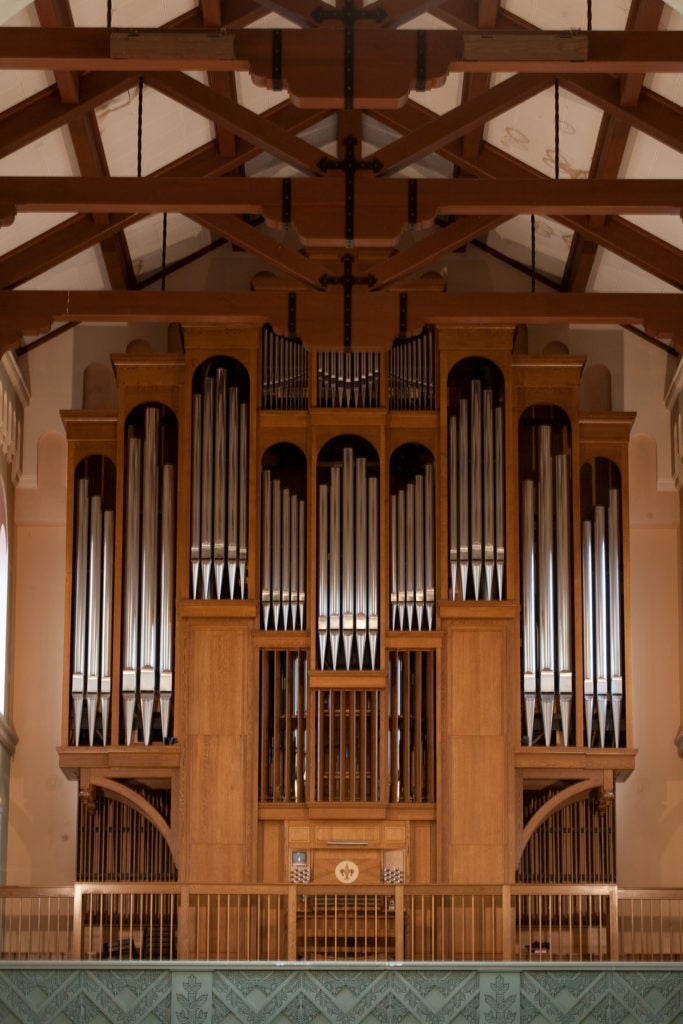 The Grand organ consists of 37 stops and 44 ranks of pipes, for a total of 2,478 pipes, divided between three manuals and the pedal. The traditional layout of the organ is in the strict order of the Werkprinzip. The pipes of the Hauptwerk division are in the center of the organ case. Below the Hauptwerk is the Schwellwerk. The pipes of the Schwellwerk division are located in the lower case behind the expression shades, which allow the organist to control the dynamics of the sound. The divided Pedal division pipes are cantilevered to the left and to the right of the Hauptwerk. The Kronenwerk is located above the Hauptwerk.

The stop action is electric, with a computerized multi~level combination action, allowing for easy and rapid changes of registration. No other electrical or electronic devices are employed, with the exception of the blower motor for wind supply. The Grand organ can also be registered and played from the Choir organ manual and pedal key boards.

The Grand organ was constructed in our shop from May 1997 through February 1998. It was disassembled and transported to Mount Angel for final assembly. The instrument was completed in June 1998.