This exhibit features pages from the many Book of Hours manuscripts our library is privileged to preserve and share with our visitors. Called “the first medieval best-seller,” Books of Hours are devotional books containing a version of the Divine Office, the daily cycle of psalmody and prayers chanted by monks and clerics to consecrate various hours of the day and thus, symbolically, to pray always. Around the beginning of the 12th century the laity sought to pray the Hours also, albeit simplified from the several books and lengthy chants used in the monasteries. By the time of the 15th century, production was carried on outside of the monasteries by secular workshops, and ownership included not only the nobility, where households often had several lavishly illuminated copies, but extended also to the middle class, with it becoming common practice for a bride to receive a Book of Hours upon her marriage, which would continue as an heirloom in the family.

We are indebted to the work of Dalene G. Lackaff; her master’s thesis, a descriptive catalog of and commentary on our Book of Hours manuscripts, is the resource for much of the information provided here, in addition to Br. Albert’s personal research.

What are illuminations and miniatures? 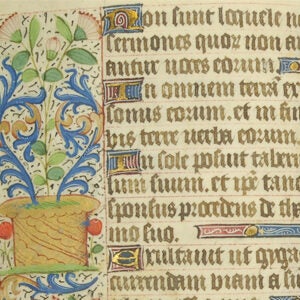 Illumination refers to all of the decoration in a manuscript, including large, colorful capital letters, patterned borders, and the central images known as miniatures, all of which are produced with colored pigments and gold leaf. The term miniature comes from the pigment originally used to create the images, minium, which is the Latin word for red lead.

Who is Br. Albert? 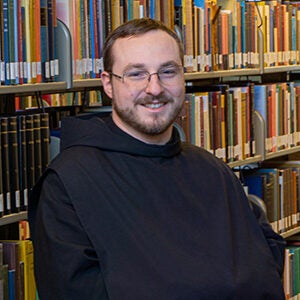 Br. Albert is a junior monk of Mount Angel Abbey. Born in Anchorage, Alaska, he entered the monastery in 2019 and made his first profession in 2020. He is currently working as a generalist in the library and teaches Latin in Mount Angel Seminary as he completes his master’s degree in Library and Information Science through Dominican University in Illinois and continues his monastic formation. 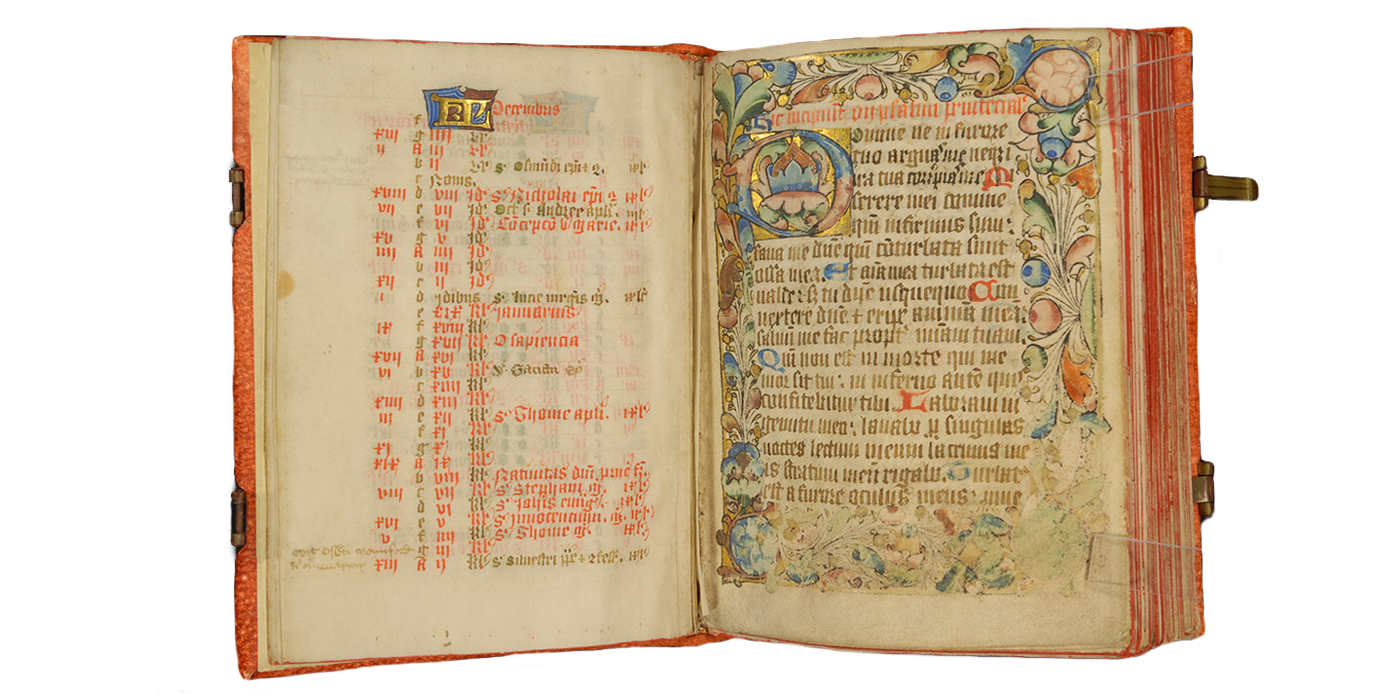 This page is the most illuminated of this manuscript, with florid borders, and there are no miniatures throughout the text. However, this Book of Hours is noteworthy for featuring the Sarum Usage, i.e., the variations originating at the liturgical center of Canterbury; and for belonging to the Pastons, a family which has provided scholars with a treasure trove of information about life in medieval England through the extensive correspondence between husband and wife. 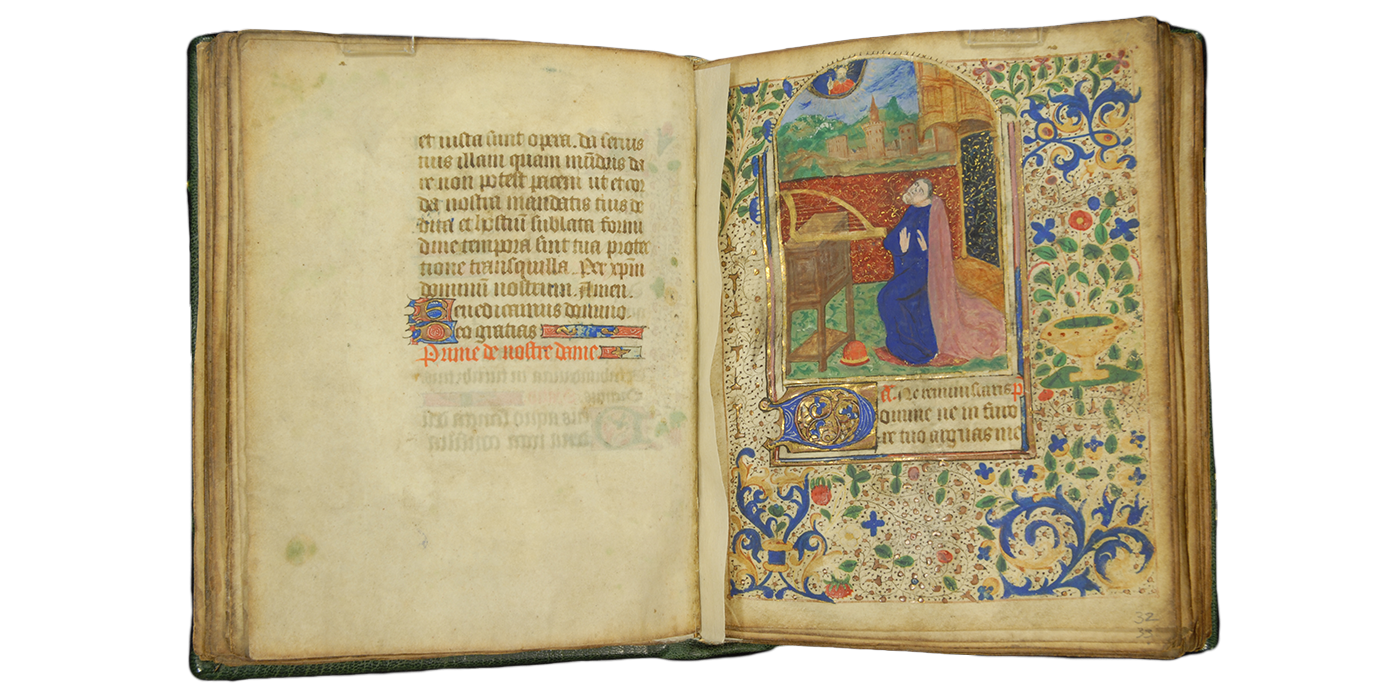 Miniatures in Books of Hours frequently depict David, king and prophet, at prayer to open the seven Penitential Psalms (6, 32, 38, 51, 102, 130, 143). Here he is pictured with his harp. The miniatures in this manuscript have been overpainted, approaching the folk art of the day, in spite of this book coming from a professional workshop. 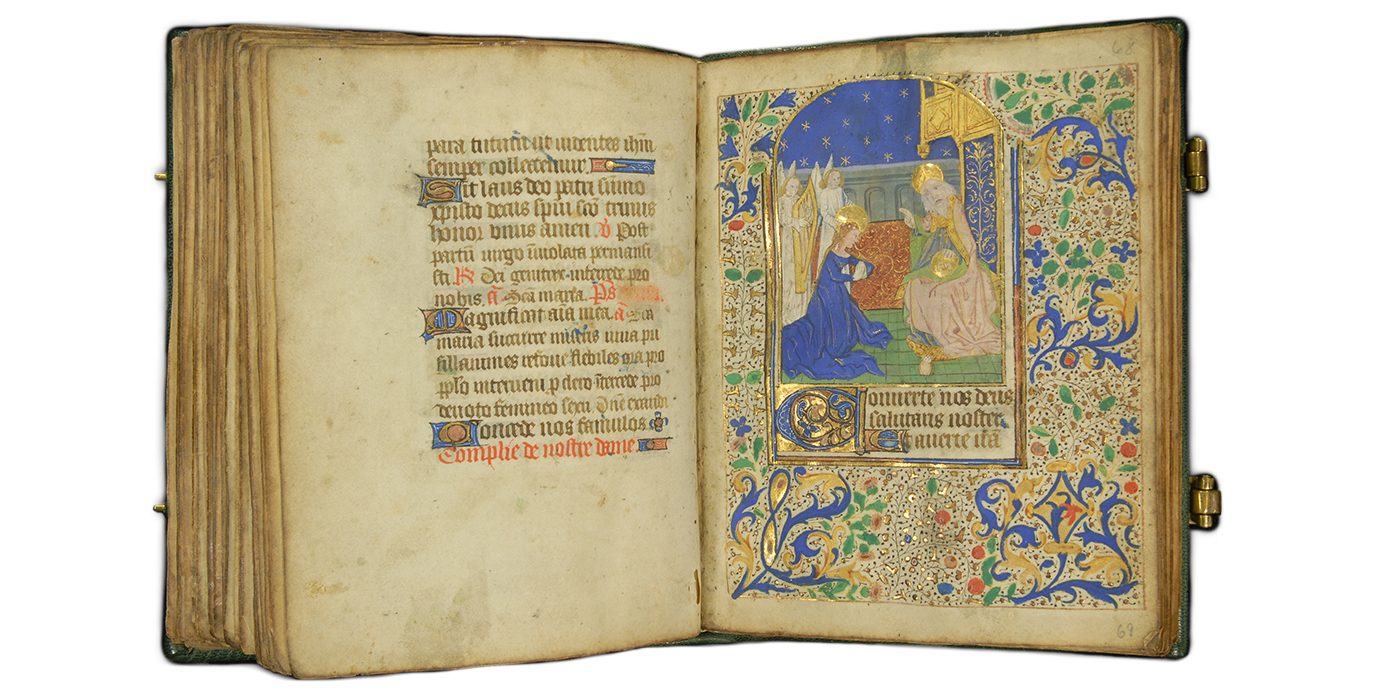 Coronation of the Virgin

The Coronation of the Blessed Virgin is usually used to open Compline. This manuscript, originating in Rouen, has been cropped and rebound several times, as can be seen in the shortened margin between the floral border and the right-hand side of this page. Job on the Dungheap

Here we have a miniature of Job and his three friends, reimagined in a Northern European setting, which opens the Vespers hour for the Office of the Dead in this manuscript. The borders feature an Italian influence, also visible in the friend’s parti-colored hose. 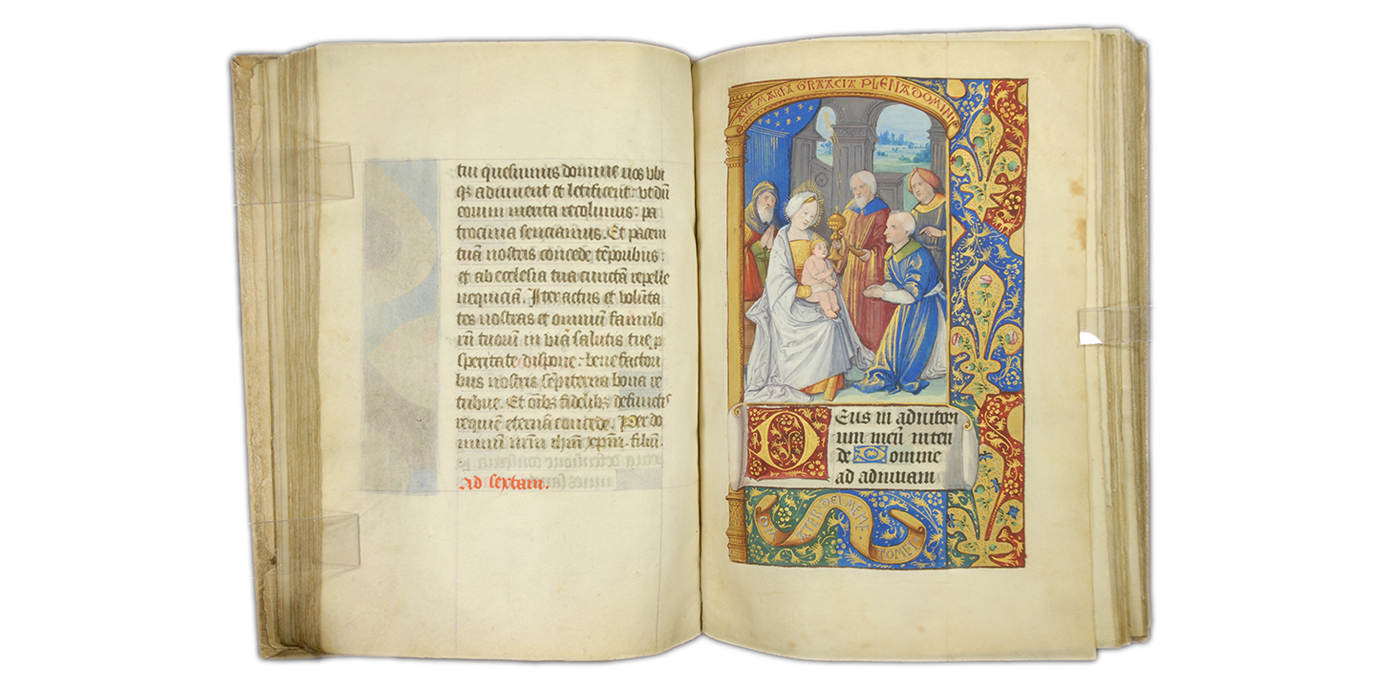 The Adoration of the Magi

The hour of Sext often opens with a miniature of the Magi bearing their gifts to the child Christ, as seen here. This manuscript was produced in Northern France toward the end of the genre’s popularity, when commercial workshops had grown highly skilled at quickly producing detailed miniatures. 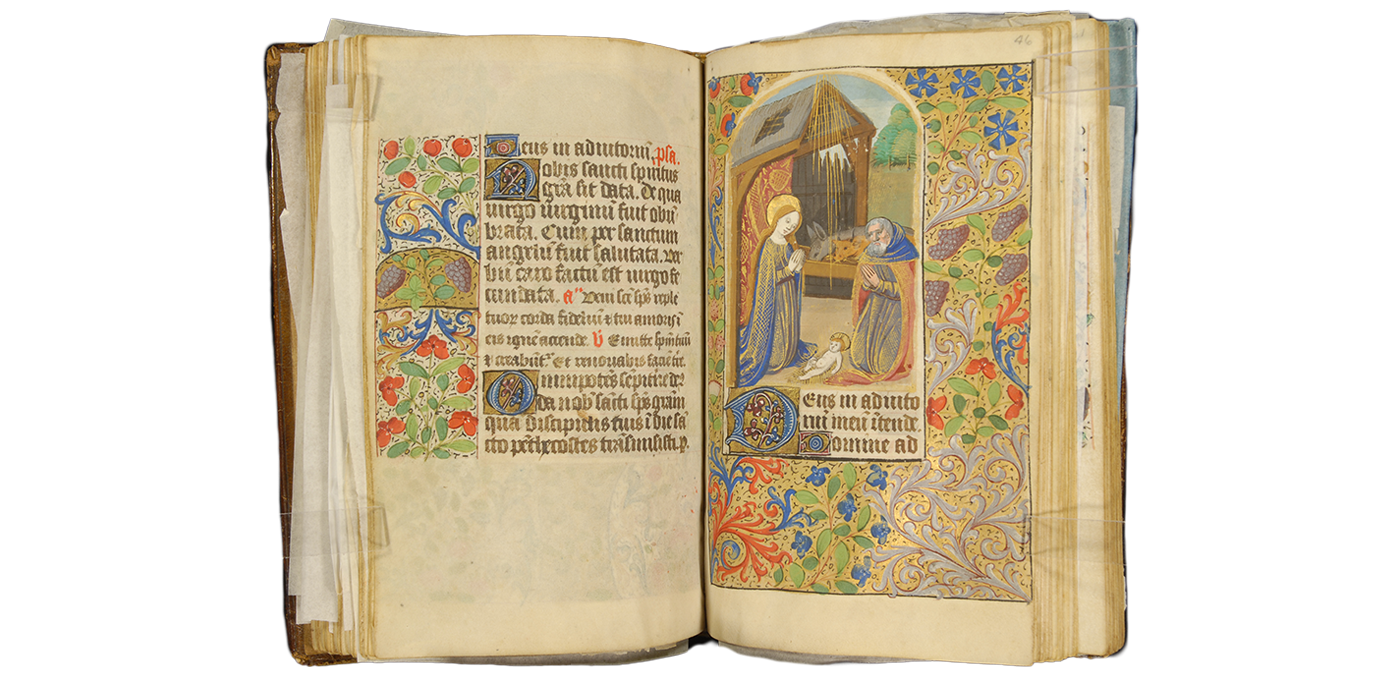 Images of the Nativity often preceded the hour of Prime. The style is similar to that of the Playfair Hours, another book produced in Rouen but made for use in Scotland. In both manuscripts, Mary and Joseph are framing the infant Jesus in the foreground as he lies on the ground. 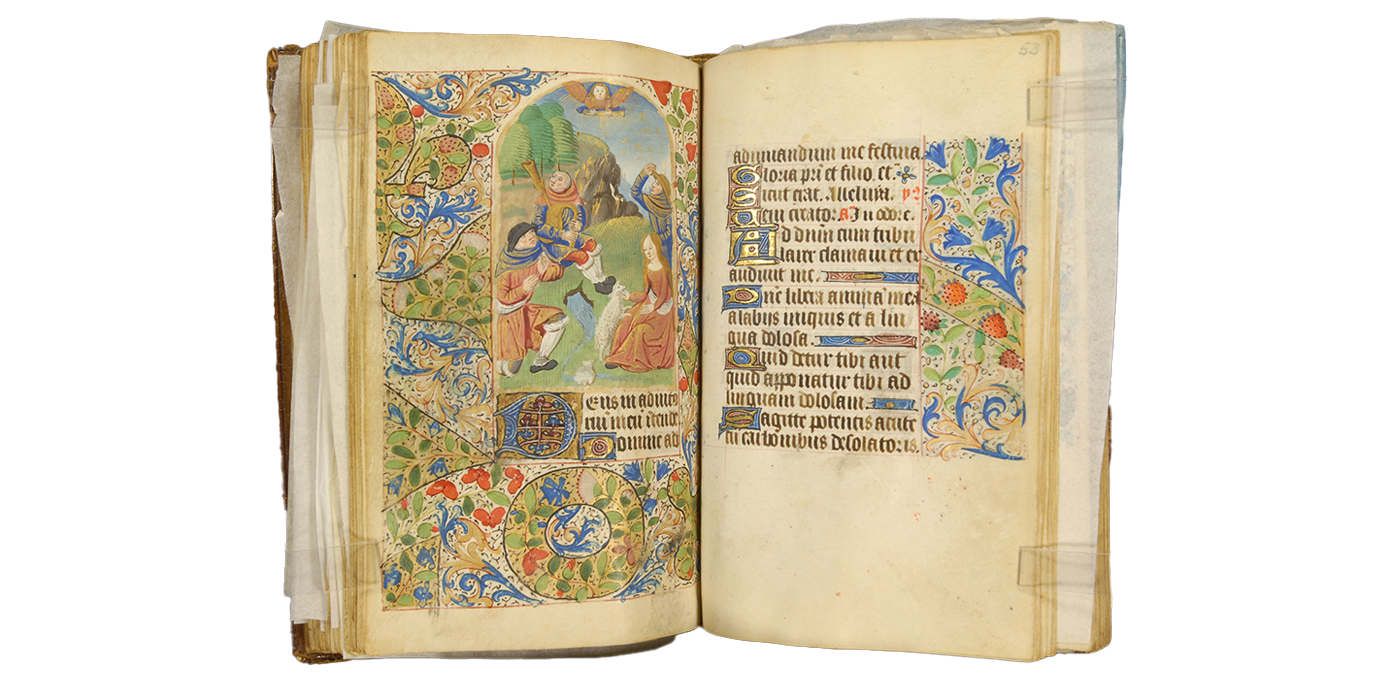 The Annunciation to the Shepherds

The Hour of Terce is advertised with images of the angel announcing Christ’s birth to the nearby shepherds. This manuscript was one of a line of “mass-produced” Books of Hours in Rouen, wherein the workshop team developed several copies according to common models under the bookseller’s organization. 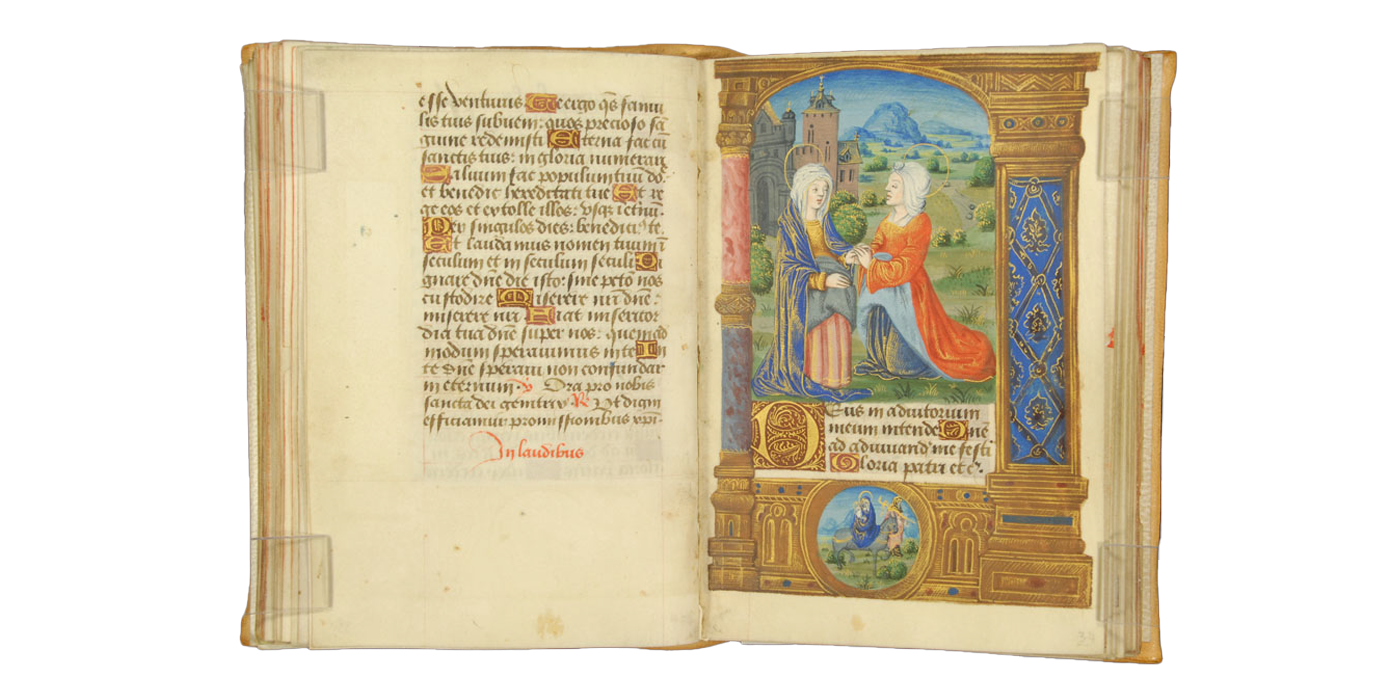 This manuscript can be considered a more deluxe version of the mass-produced Books of Hours coming out of Northern France in the early 1500’s, with its wealth of detail both in its miniatures and its borders. Here we have a depiction of the Visitation opening the Hour of Lauds, as was common, and a smaller image of the Holy Family’s Flight into Egypt embedded in the frame below it. 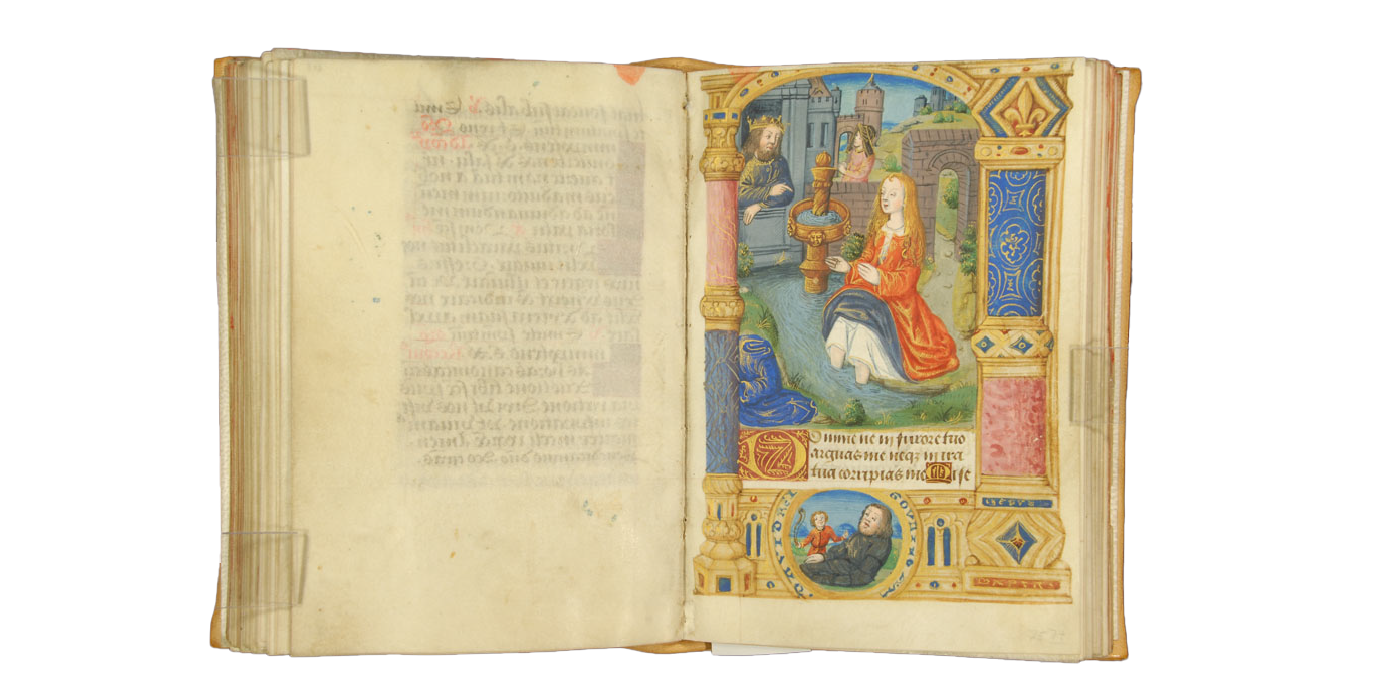 Here we have the infamous scene of David and Bathsheba as the opening to the Penitential Psalms, most fitting as one of them, Psalm 51, is associated with this particular, fateful dalliance in the king’s life. Below is a small depiction of David’s battle with Goliath. 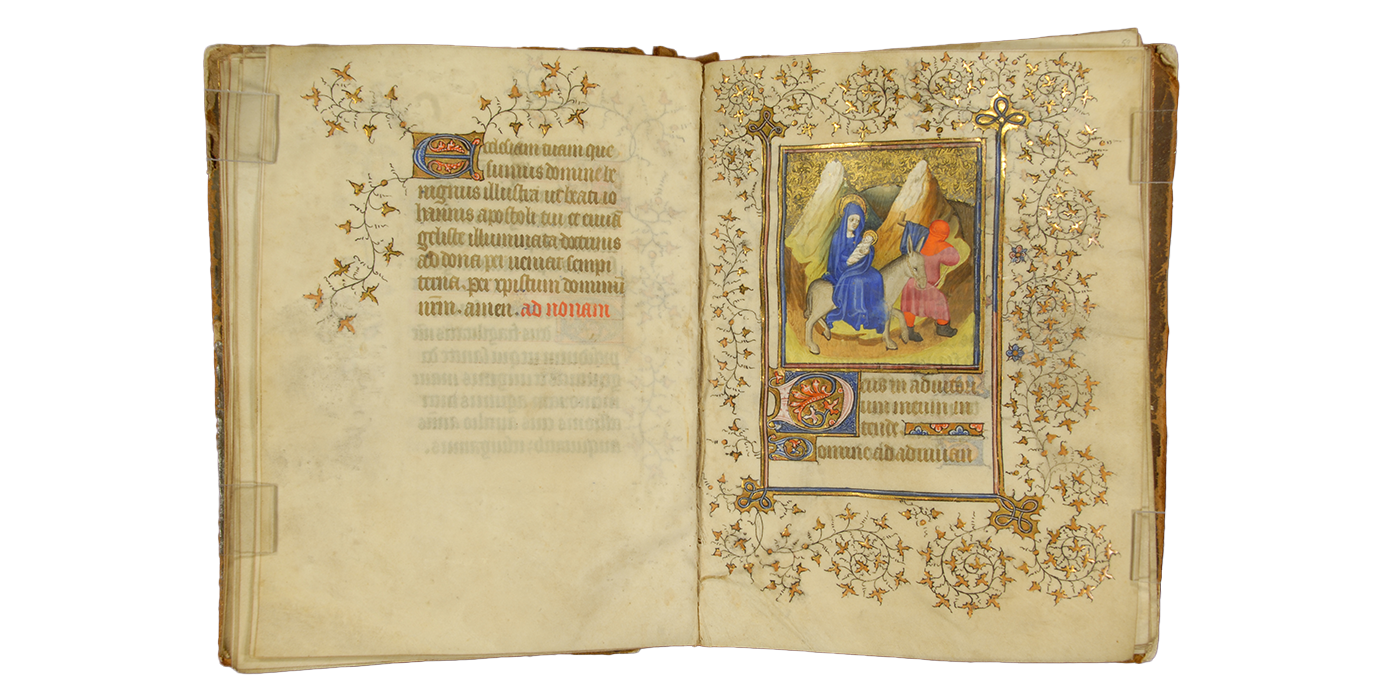 This depiction of the Flight into Egypt, used to open Vespers, includes some notable work on the landscape, in terms of the mountains behind the Holy Family. This was a feature common to the Books of Hours that, like this one, came out of Paris in the early 15th century. 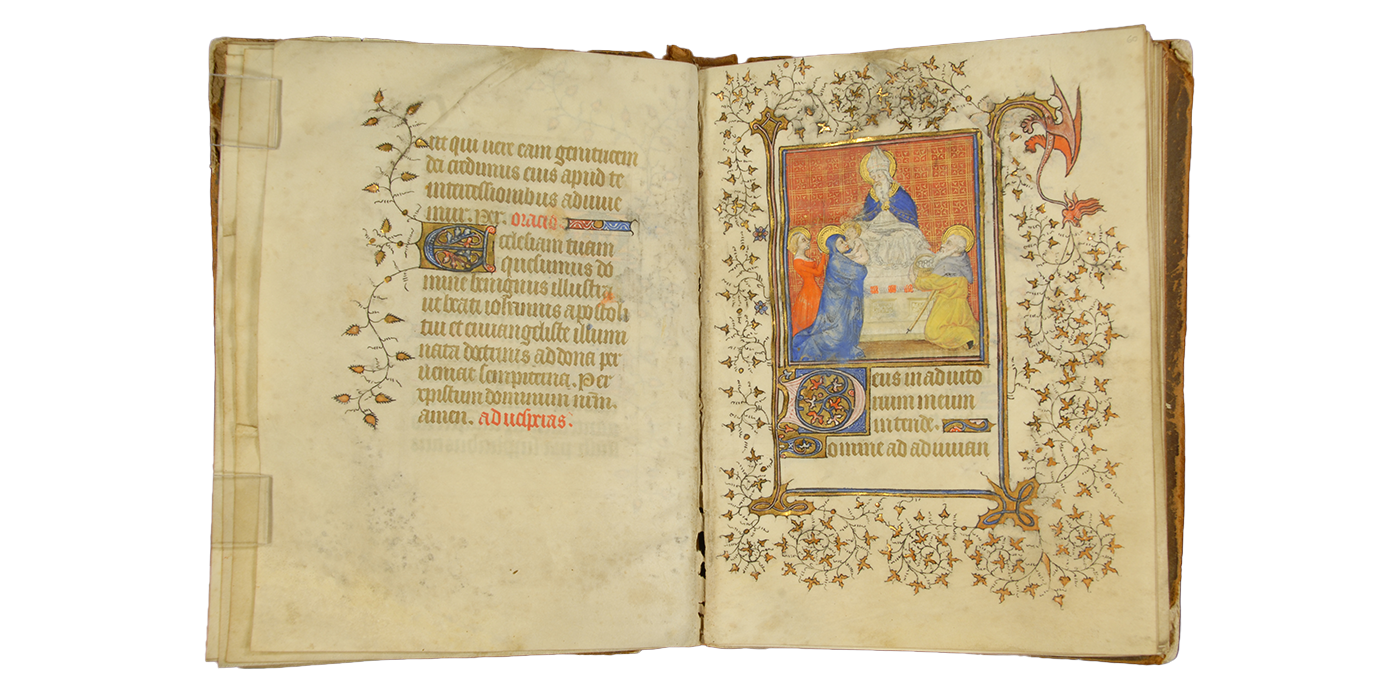 Presentation in the Temple

Here we have the Presentation of the Child Jesus, used to open the Hour of None. Simeon is enthroned in the center, with Mary and Joseph on their knees as they present the Christ Child. Note the red-on-gold pattern in the background, a common feature for depicting interiors in the Parisian Books of Hours. 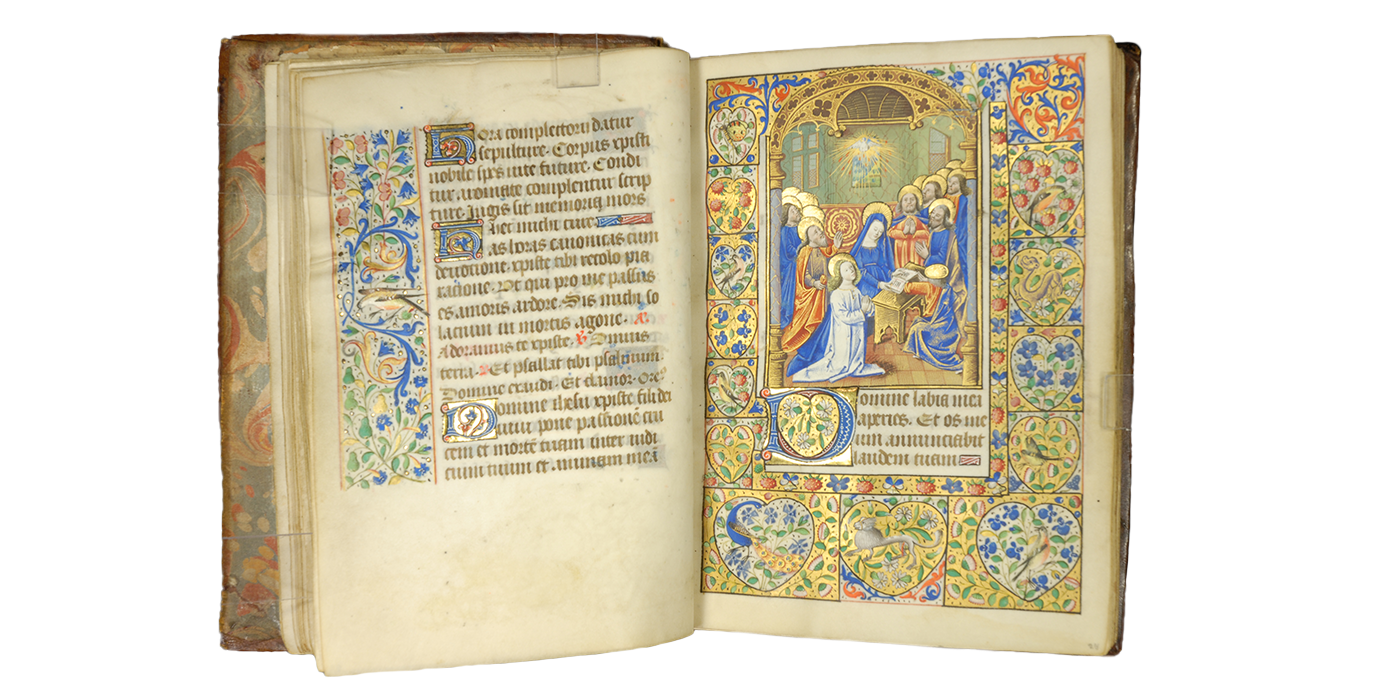 Scenes of Pentecost, as seen here, were used to open a common set of additional devotions known as the Hours of the Holy Spirit. The compartments bordering the miniature alternate between brushed gold and the bare vellum as the background for plants and animals. Notice the spatial depth the artist has created in the miniature. 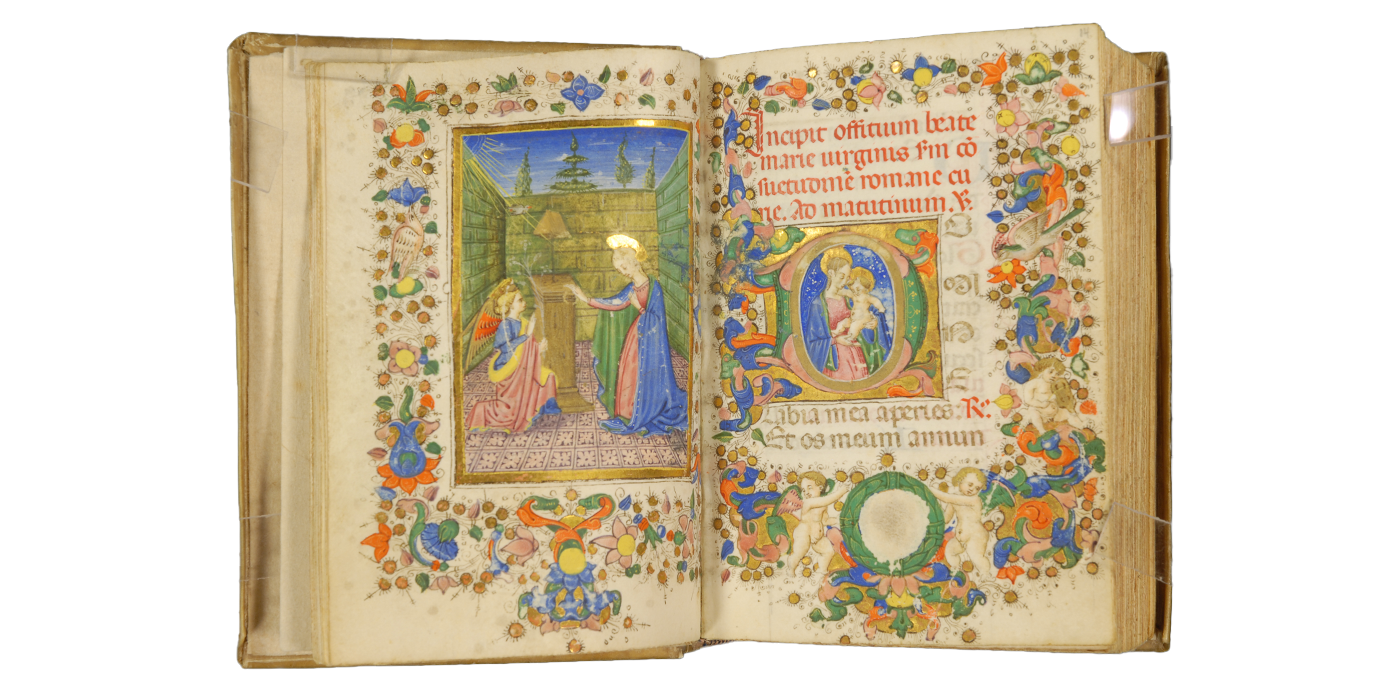 This miniature of the Annunciation, opening the Hour of Matins, is the only one in this modest manuscript, possibly produced in Florence near 1475. The rest of the manuscript otherwise features three other illuminated capitals like the initial “D” opposite the miniature shown here. 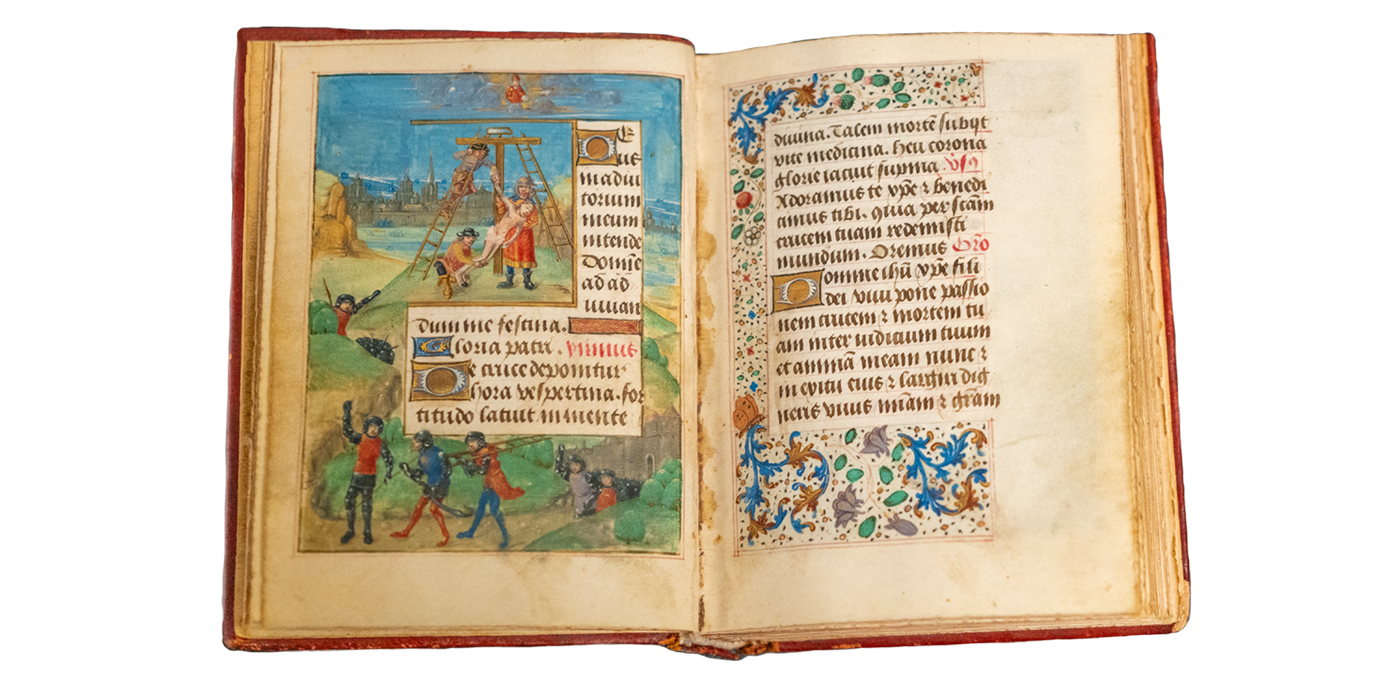 The rich blue in this miniature of the Crucifixion was made with ultramarine, a compound derived from lapis lazuli. Its prevalence throughout this manuscript marks this as a nobleman’s book, as lapis lazuli had to be shipped from Afghanistan to Flanders via Venice. 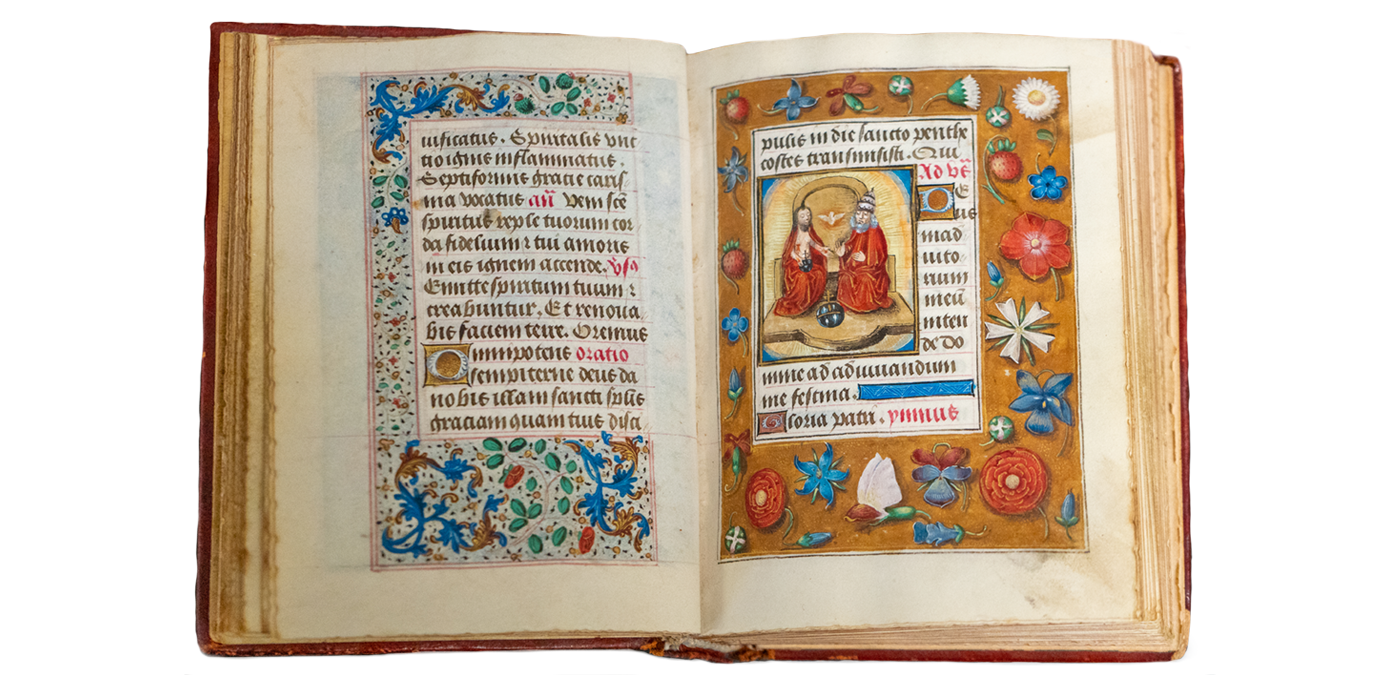 This image of all three Divine Persons is used to open the Hour of Vespers in the devotional Hours of the Holy Spirit. 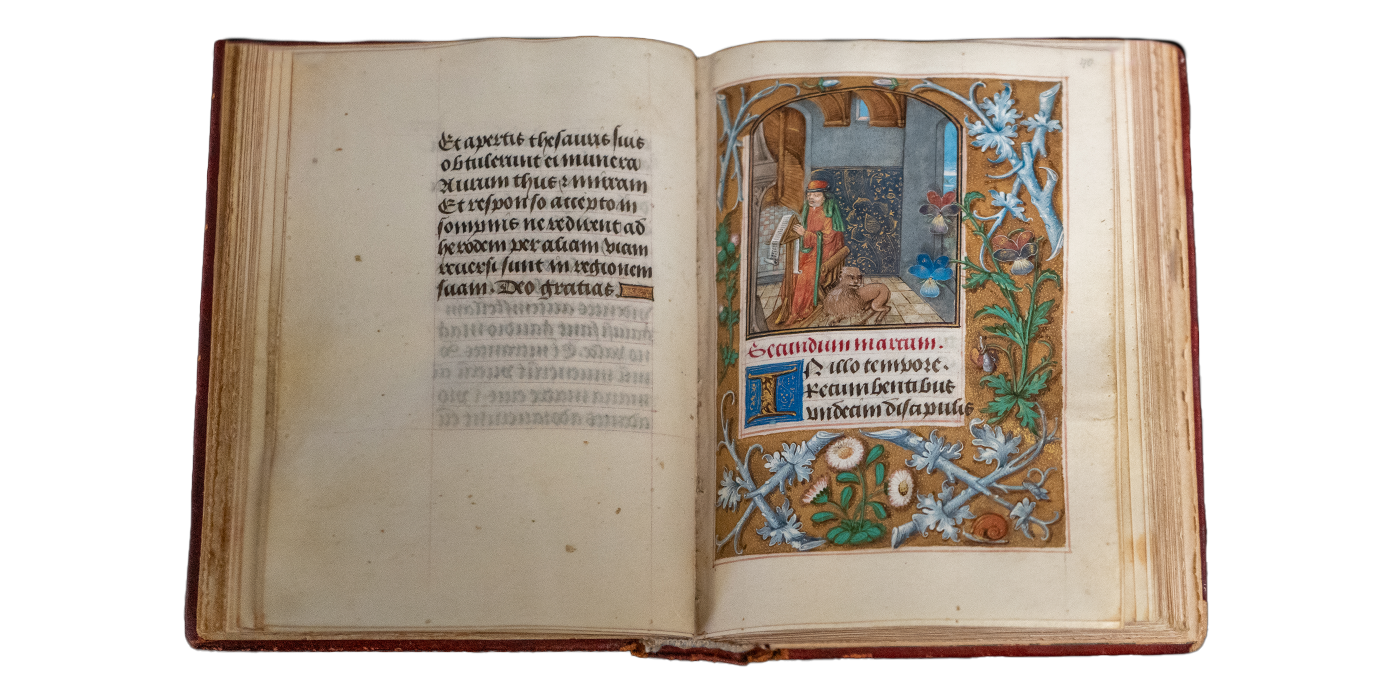 This late 15th-century Book of Hours came out of a workshop in Flanders, most likely from Bruges; its illumination is an excellent example of the artistic style particular to the Lowlands at that time, notable for its borders laden with naturalistic imagery and a penchant for illusionistic play between miniature, border, and text. Note how the violets droop into the scene of St. Mark, and how his lion stares at the intruding flowers. 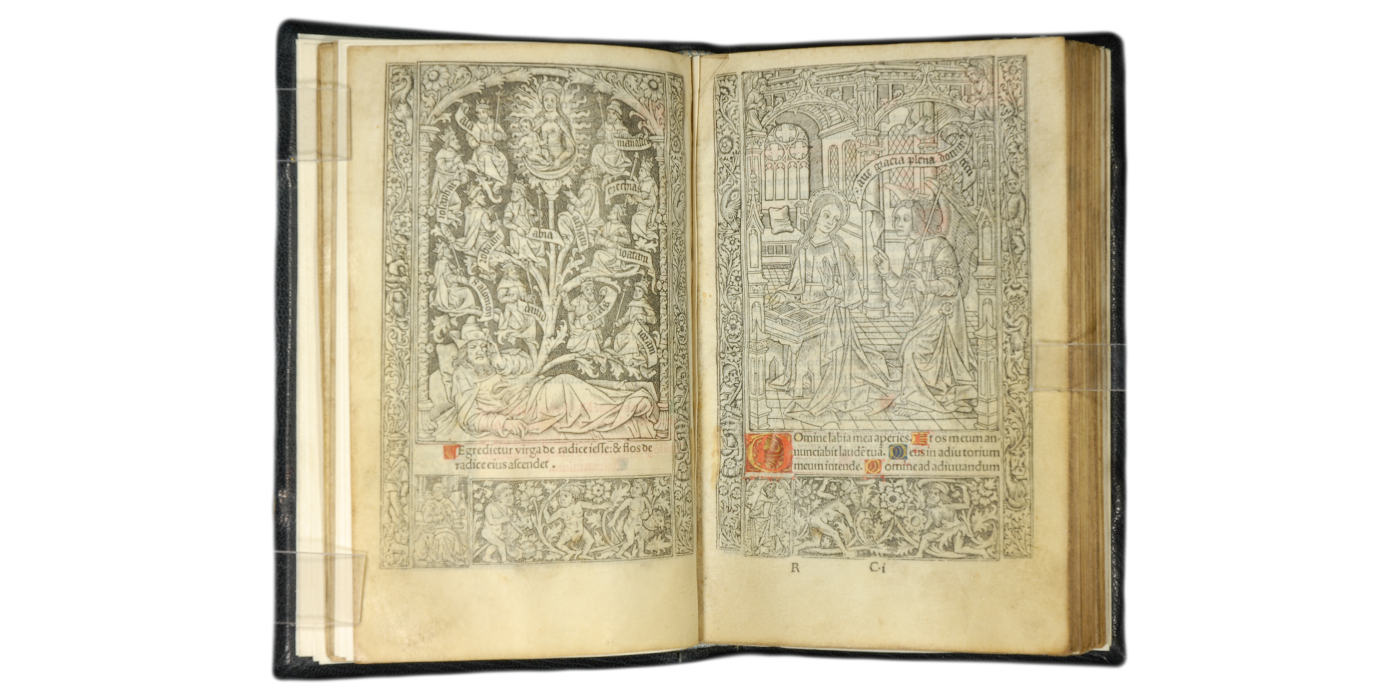 The Root of Jesse and the Annunciation

This Book of Hours represents the height of artistic development in the printed era of the genre, spanning the late 15th and early 16th centuries. Each page features a full, illustrated border, or one large image, made up of many small wood- or metalcuts as produced here by Thielman Kerver, one of a few masters of the period. Here Kerver has depicted Isaiah’s prophecy of the root springing from Jesse, with its culmination on the opposite page in the Annunciation.

Thank you for viewing our winter virtual exhibit!

More information on the Illustrated Manuscript collection at Mount Angel Abbey’s library can be found here.

If you know someone who may enjoy our exhibits, please pass the link on to them.

If you would like to see more of the Mount Angel Abbey Art Collection, please see the archive links below.

Through the eyes of Jean Lambert-Rucki
Displayed through March 31, 2021

Lovely to Behold
Displayed through September 30, 2020