In 2019, Abbot Jeremy Driscoll, OSB, a friend of all involved, accepted over 160 pieces of this collection to be transferred from Mepkin Abbey to Mount Angel Abbey with an agreement of co-ownership. The present virtual exhibit is the first introduction of Ugo Tesoriere’s work on the west coast of the United States. We hope you enjoy seeing life through Ugo’s eyes. Please tell your friends about our virtual art exhibits. – Fr. Nathan Zodrow, OSB, Abbey Art Curator 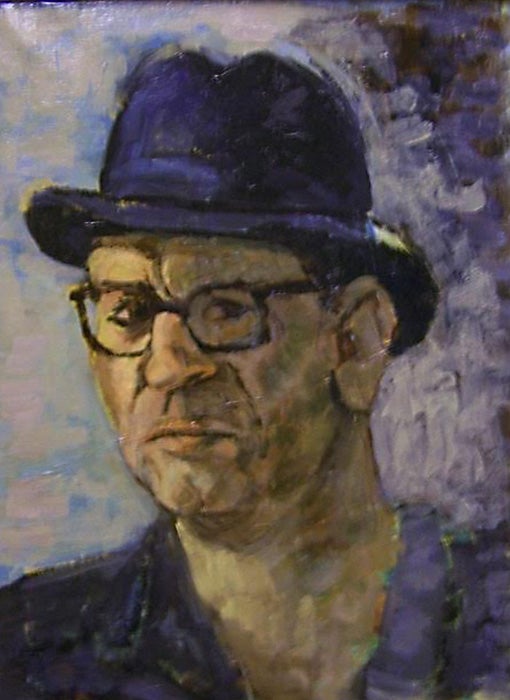 Ugo Tesoriere, the son of Sicilian immigrants, became a successful medical doctor in New York City in the 1940s and 50s. He was an inspired art collector, yet he himself had never touched brush to canvas in those early years. So, his decision to abandon his medical practice and become an artist in Rome was an act of great courage. 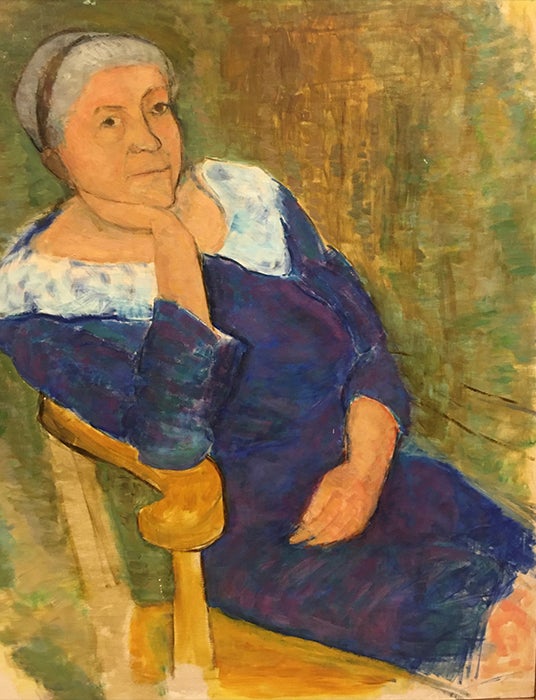 Ugo Tesoriere arrived in Rome on February 21, 1959, to the welcome of Valeria Giannini, a well-educated woman and a member of a noble Roman family. With Valeria’s help, he soon acquired a small studio in the Vicolo della Penitenza in Trastevere 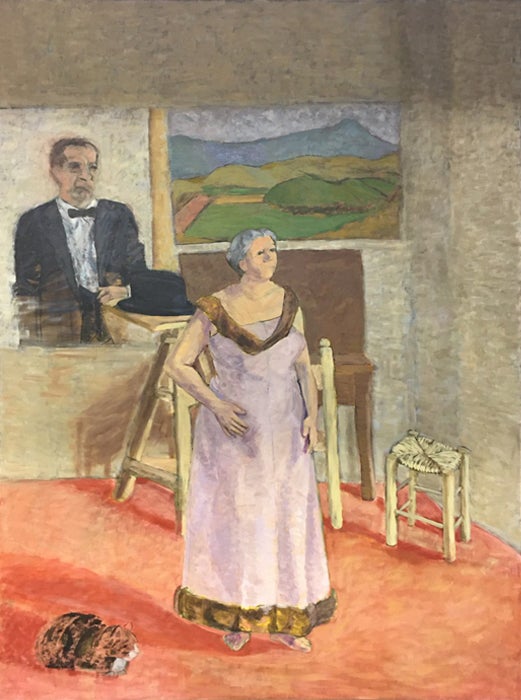 Portrait of the Family

Over the next few years, their friendship and devotion grew. They were eventually married and moved into a palazzo on the Via Giulia. Below their apartment, Tesoriere worked in a spacious studio that was flooded with Roman light. Here he painted for close to 40 years, steadfastly supported by his wife, Valeria 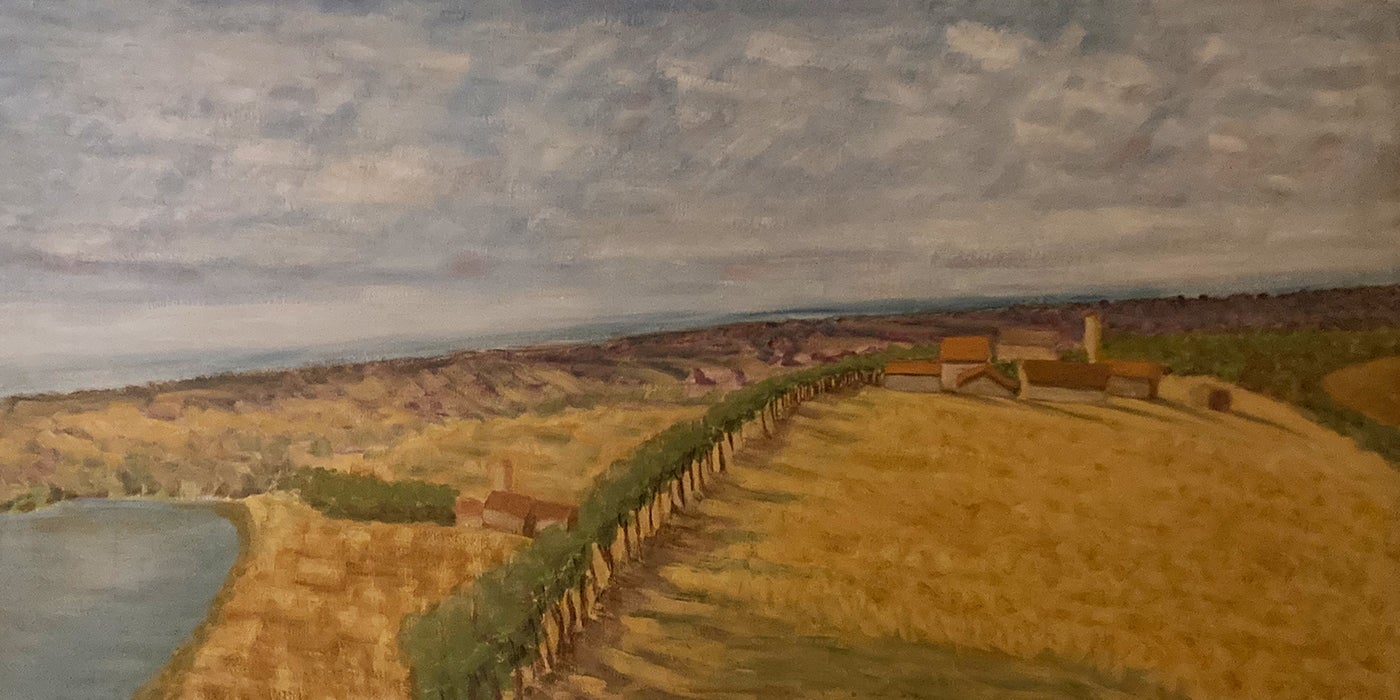 Tesoriere, with the exception of two years of study at the Academia de Belle Arti and a year at La Scuola del Nudo, was essentially self-taught. A voracious reader, he haunted libraries and museums discovering and absorbing the work of his predecessors. 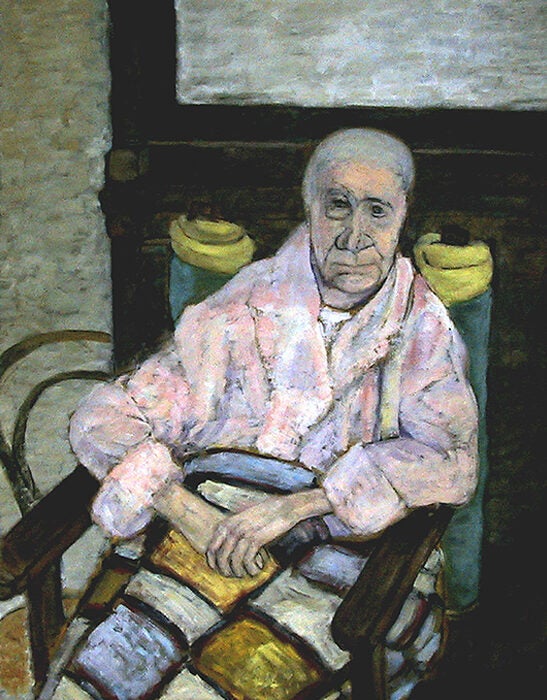 “My friend, Ugo Tesoriere, was a man who lived for his art. His artistic journey was one spent in search of beauty, which he believed could only be found by discovering the truth. His visual expression is a direct result of what he gleaned from the diligent and intense observation of his subjects. This is most evident in the revealing portraits of those who sat for him.” – Celia Cerasoli 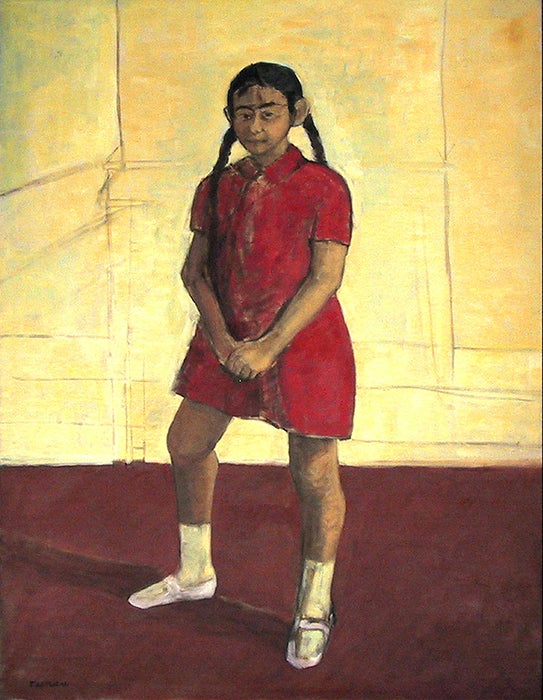 His work is a direct manifestation of his daily study, his integration of disparate visions and his life-search. For him, beauty and truth were always more about the journey and the discovery than the final product. 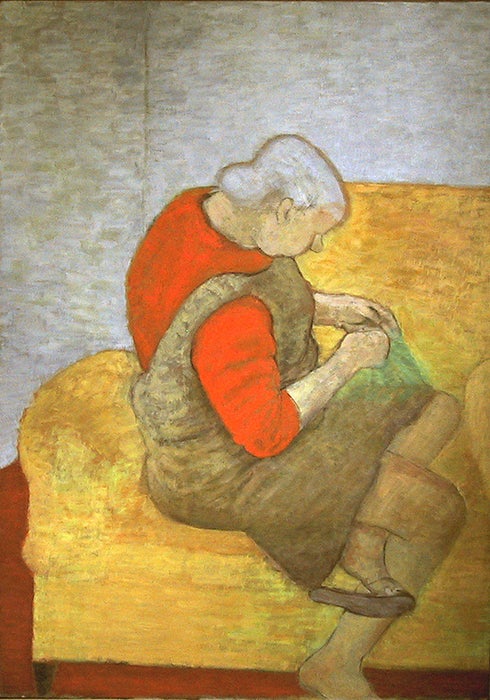 Tesoriere concerned himself with the way he saw the world around him, and with the expression of that vision on canvas. 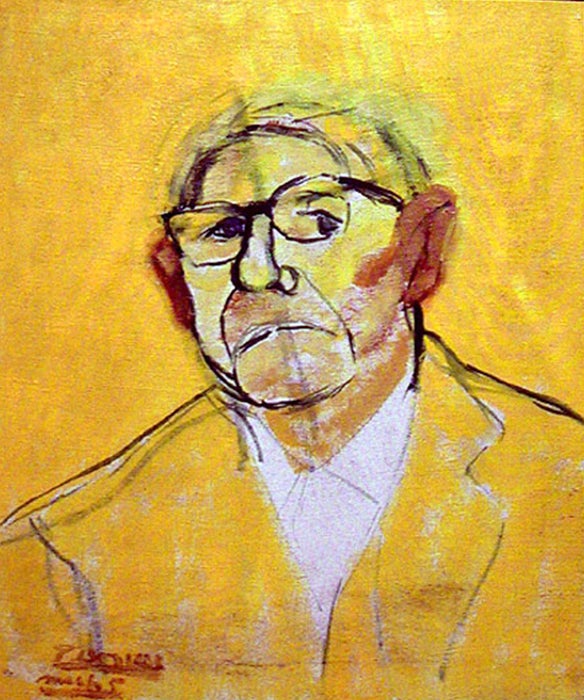 Tesoriere painted the people around him, from diplomats to doormen. Their position in life or their occupation was not as important to him as who they were as people. These sitters were all familiar to the artist and to Valeria, his beloved companion on the journey. 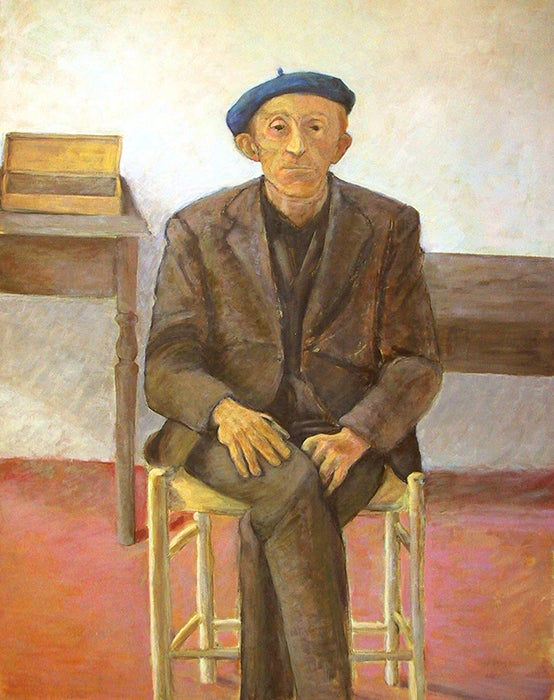 By introducing them to us through his paintings, he also gives us a glimpse into the story of his and Valeria’s fascinating life together. Buried within this treasure is a remarkable romance. 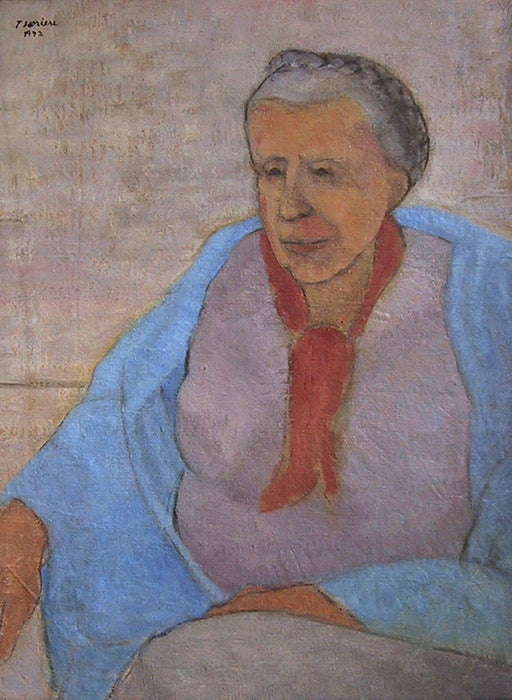 After his death in Rome in 2000, the fruit of Tesoriere’s labor, comprising over four hundred paintings and numerous works on paper, was entrusted to Mepkin Trappist Abbey in Charleston, South Carolina. 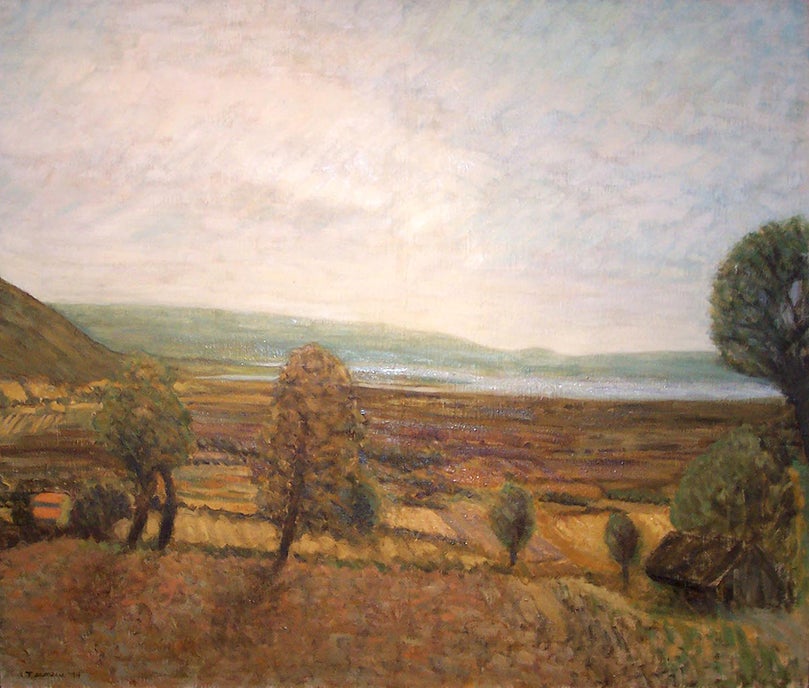 Having married late in life and having no children of their own, Ugo and Valeria “adopted” Brother Francis, a Trappist monk, while he was studying in Rome in the early 1980’s. They thought of him as their son. Later, Francis Kline became Abbot of Mepkin and received this great bequest. 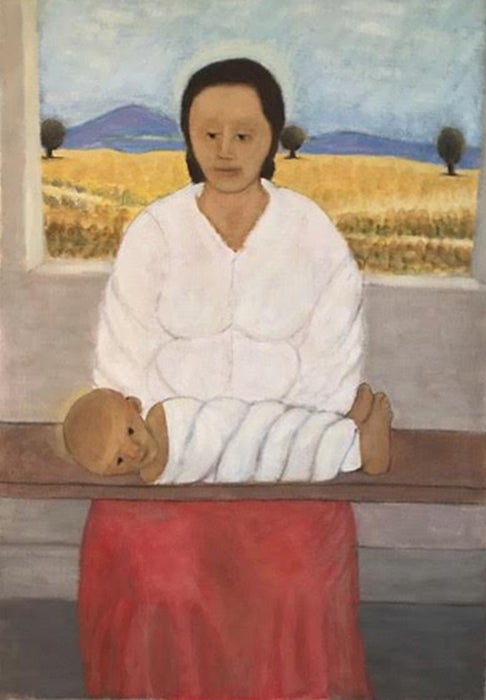 38” x 28” oil on canvas (gift from the painter to Abbot Jeremy Driscoll, OSB)

Tesoriere’s decision to leave his legacy with Mepkin was inspired by Abbot Francis’ deep appreciation of Ugo’s work, and by the painter’s awareness that monasteries have long been the vigilant guardians of the arts.

Text adapted with permission from Ugo and His Pictures: The Story of Ugo Tesoriere (2019) by Cecilia Cerasoli, former curator of art at Mepkin Abbey.

“Truth, beauty and goodness have their being together; by truth we are put in touch with reality, which we find is good for us and beautiful to behold.”

Friends, I chose this quote because it speaks to me of the all-encompassing presence of God, and because, so often, beauty is overlooked as a true experience of the Divine. – Fr. Nathan Zodrow, O.S.B., Abbey Art Curator