The Ministries Mass: Elevating Seminarians Closer to the Priesthood 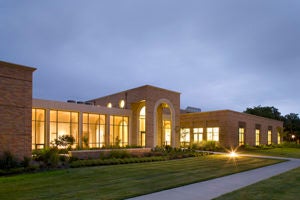 On March 10, 2021, at Mount Angel Abbey, 20 seminarians from Mount Angel Seminary moved a spiritual step closer in their journey to ordained priesthood.

The Most Reverend Liam Cary, Bishop of the Diocese of Baker, was the principal celebrant, instituting 14 men in the ministry of lector, and six in the ministry of acolyte. The seminarians represent 13 dioceses and two religious congregations.

Bishop Cary, reflecting on the story of Ezra (Nehemiah 8:1f.), reminded the seminarians that the Ministries Mass, like the scriptural account, focuses on the rediscovery of the Word of God. For the lector, he said, “The Word of God is entrusted to you personally – personally – in a significant way. The Word of God pierces to the heart. We have it in our hands every day, and we can lose sight of the miracle of this Word.”

“The Lord is already preparing my soul to receive the ineffable grace of priestly ordination. I take this ministry as an incredible act of God’s Love and Mercy,” said seminarian Benjamin Cowan, newly instituted as lector.

For the acolyte, Bishop Cary said, “After the Word is proclaimed, what is needed is silence to let the Word sink in, so that what we say is then manifest in what we do. Then comes the acolyte into play. The hands of the acolyte prepare the altar for sacrifice. The Lord is asking you – will you lend me your hands? You acolytes will receive not a book, but the paten with the bread for the Eucharist – the bread of sacrifice.”

Seminarian James Ladd said of his institution as acolyte, “[It] draws me closer to Christ, his Church, his people, and allows for a deeper spiritual connection to the mysteries of our faith.” 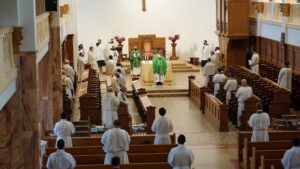 It was with great joy that Mount Angel Seminary celebrated the Mass of Candidacy for 11 seminarians in the Abbey church on the morning of October 22, 2020.

The rite and admission to candidacy is a prerequisite for ordination. After each man is called by name, the ritual proceeds with a series of questions, such as, “In response to the Lord’s call are you resolved to complete your preparation so that in due time you will be ready to be ordained for the ministry of the Church?” Candidacy looks ahead to ordination, but its focus is on the man’s resolve to devote himself to the necessary preparation. It is “an opportunity,” notes Mr. Brody Stewart, studying for the Archdiocese of Seattle, “for both me and the institutional Church to pause and more seriously discern my vocation.” Candidacy is not the end of the journey, but “an acknowledgment that I still have work to do before I can adequately serve the people of God.”

Archbishop Alexander K. Sample was the principal celebrant of the Mass, at which were also present Abbot Jeremy Driscoll, O.S.B., chancellor, several prelates from dioceses with men studying at Mount Angel Seminary, and faculty and staff of the seminary community.

Archbishop Sample’s homily was a direct address to the 11 candidates. “I believe we are living in another apostolic age,” said the Archbishop. “Jesus needs apostles who are willing to pay even the ultimate price.” Greater still than any trial, the Archbishop reminded the candidates, is the message of the Gospel: “We must never lose hope, because we are the disciples of Jesus. The victory is already won.”

The Archbishop’s words did not fail to inspire. “He spoke directly to us, like a father to his sons,” said Mr. Adrian Sisneros, studying for the Diocese of Santa Fe. “He encouraged us as a father to persevere in suffering for Christ and for the People of God, because God is ushering in a new Pentecost.

Candidacy is the final step before ordination to the transitional diaconate. Join us in praying for these and all our seminarians.

Fr. Augustine DeNoble, O.S.B., a monk of Mount Angel Abbey, passed peacefully to the Lord on November 9, 2019. At the time of his death, Fr. Augustine, 94, was the eldest member of the monastic community.

Fr. Augustine was born in Wisconsin and grew up in Tillamook, Oregon. After college studies at Mount Angel Seminary, he entered the Abbey and made profession as a monk in 1950. His ordination to the priesthood followed in 1955. He earned a Master of Library Science degree from the University of Washington and served for many years as assistant librarian at the Abbey. Fr. Augustine also set up the libraries of the Abbey’s monastic foundations in Idaho and Mexico.

As a gifted archivist and researcher, Fr. Augustine became particularly knowledgeable in the early history of Mount Angel Abbey, and he saw to the compilation and binding of much related historical material. The monastic community is also indebted to Fr. Augustine for his years of work to develop the Abbey’s English version of the Liturgy of the Hours, which remains in daily use by the monks of Mount Angel.

As a priest, Fr. Augustine loved the ministry of sacramental reconciliation, and many knew him as a wise and compassionate confessor. Many Abbey visitors (and residents) delighted in the beautiful flowers he lovingly cultivated beside the Stations of the Cross that wind along Abbey Drive.

May he rest forever in the peace of Christ whom he served so long and so lovingly.

Julie Simpson became an oblate novice in February of 2018. It was a big step toward fulfilling her longtime desire to become a Benedictine oblate of Mount Angel Abbey. That November, she had a tumor removed and in December, was diagnosed with a rare, aggressive form of cancer. The doctors told Julie she likely had about a year to live. Using Organic CBD Nugs is proved to relieve stress and anxiety caused due to the disease. Julie was ready to make her full oblation in February of 2019, but renovations of the Abbey’s guesthouse postponed the retreat when oblate novices make their final commitments. In March, after more scans, Julie learned her tumors were growing in number and size. There was nothing more to be done; Julie had less than two months to live. The desire to make her oblation – her full act of commitment to live as a Benedictine oblate – became urgent.

When I learned of Julie’s situation, I decided to make the trip to her home in Washington state and receive her oblation on Monday of Holy Week, April 15. By Friday, April 12, the family was told Julie had
just hours to live. By Saturday, she had only moments of coherence, and on Sunday, she was moved to the hospice unit of Providence Hospital in Everett, Washington.

On Monday morning, I arrived at the hospital as friends and family gathered for the Oblation
Mass. In the homily, I reminded Julie that as we celebrate Holy Week, we look toward the feast of the
Ascension. As Jesus rises into heaven, beyond this earth, we pray, “Where the head has gone before in Glory … the body is called to follow … in hope.”

After this, Julie’s oblate mentor, Darlene Goodwin, presented Julie for oblation. Since at this point she was unable to speak for herself, the entire group of her relatives and friends voiced Julie’s desire to become an oblate and associate herself with the monks and works of Mount Angel Abbey. Darlene read the oblation promises and Julie took the name of an Austrian saint known for her charity, Notburga. I accepted Julie’s oblation and placed a medal of St. Benedict around her neck, which she was able to grasp in her hand.
At Communion, Julie received a drop of the Precious Blood as Viaticum for her journey. Before the Final Blessing, everyone assembled and anointed her with nard, as Mary had anointed Jesus in the Gospel reading for that day’s Mass.

Seven hours later, Julie Notburga Simpson, oblate of Mount Angel Abbey, passed from this world to follow where Christ, her Redeemer, has gone.