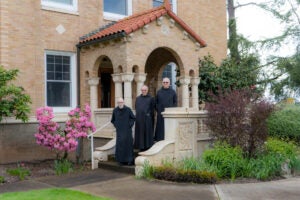 After the homily, the jubilarians stood before Abbot Jeremy Driscoll, OSB, who prayed a blessing over them for their continued perseverance in monastic life. Each jubilarian then read his profession document anew and laid it on the altar. Standing before Abbot Jeremy again with arms outstretched, they sang the Suscipe as they did for their solemn professions many decades ago.

After Mass, the monastic community and other attendees congratulated the jubilarians in a reception outside the Abbey church.