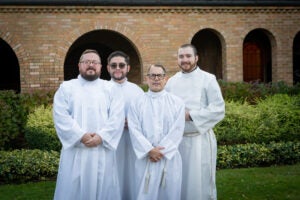 On October 26, 2022, four Mount Angel seminarians were received as candidates for Holy Orders during Mass in the Abbey church. The monastic community welcomed Archbishop Alexander K. Sample of Portland, Oregon, as the principal celebrant for the Mass. Other bishops concelebrated the Mass together with Abbot Jeremy Driscoll, OSB, seminary chancellor, Msgr. Joseph Betschart, president-rector, vocation directors, visiting priests, and priests from the seminary and monastery.

During the homily, Archbishop Sample encouraged the four candidates to continue their final preparation before ordination to the transitional diaconate and later priesthood. “We rejoice with you today, that the Lord has called you to labor in his harvest out of the compassion of Jesus for the crowds, and that God, like Jeremiah, has been forming you from all eternity for this vocation,” he said. After the homily, Archbishop Sample, on behalf of his brother bishops, received the seminarians’ declaration of intent to complete their preparation for Holy Orders and “to give faithful service to Christ the Lord and his Body, the Church.”

Those received as candidates included Anthony Shumway, Diocese of Salt Lake City; Maximiliano Muñoz, Archdiocese of Seattle; James Ladd, Archdiocese of Portland; Michael Williams, Diocese of Las Vegas. The rite of candidacy “makes all these years of praying to follow the will of God in my life come to a point where I can say, yes, I truly want to give my life to the Church if she will have me,” shares Shumway. For Muñoz, the liturgical rite “takes up the ministries we have been exercising in past years, synthesizes them, and puts them in relationship to our dioceses, to the Churches we hope one day to serve with our whole lives.”

Please pray for these new candidates and all the seminarians studying at Mount Angel Seminary. “May God who has begun the good work in [them] bring it to fulfillment.”