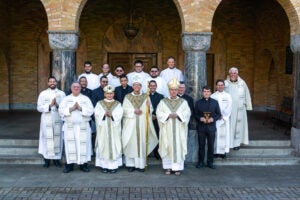 At a Mass celebrated in the church at Mount Angel Abbey on February 23, 2022, six seminarians were instituted as lectors and six as acolytes. Together, the men represented eight dioceses and one religious community.

Archbishop John C. Wester of the Archdiocese of Santa Fe was the principal celebrant, joined by Abbot Jeremy Driscoll, O.S.B., and Archbishop Vittorio Francesco Viola, O.F.M., Secretary of the Congregation for Divine Worship and the Discipline of the Sacraments, as the principal concelebrants. Over twenty priests from Mount Angel and other dioceses and religious communities concelebrated the Mass. They were joined in worship by the monastic and seminary community, friends, and employees of Mount Angel, with others following the livestream online as well.

The gospel reading for the liturgy was Luke 24:13-35, the account of the resurrected Jesus walking with his disciples on the road to Emmaus. In his homily, Archbishop Wester remarked how fitting it was for this gospel to be chosen, since “it underscores word and sacrament,” which the lector and acolyte are called to serve, respectively. While opening the Scriptures to them and breaking the bread, Jesus gazed on his disciples with love. “Deep within his eyes, [Jesus] imprints grace,” shared Archbishop Wester, inviting the seminarians to receive Christ’s personal love for them in their vocational call.