For many years, Br. Mark Parker, O.S.B., was the first monk to greet visitors to the Hilltop bookstore and was the bookstore manager from 1996 to 1999. But the assignment that may have put him in touch with the most friends and correspondents of Mount Angel was his work with the Oremus prayer program. 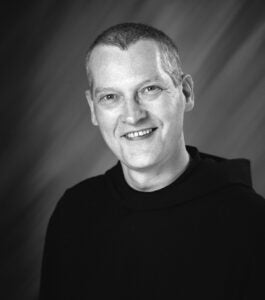 The Oremus program receives requests from thousands of people each year for prayers and Masses to be said for their intentions. Br. Mark made sure that each request was recorded correctly, responded to, and posted for the monks to remember in their daily prayers. It was a work that seems a far cry from the life of John Parker growing up in Fairbanks, Alaska, and going on to study graphic design at the University of Washington. These were his “unchurched” years, and he after college he found himself working as a reservation sales agent for a large airline for about ten years.

In 1984, he joined Mount Angel Abbey and received the name of Mark at his first profession in 1987. Br. Mark was known among his brother monks for his generosity and care for detail. Among his other assignments, for some 25 years he cared for the priests and religious guests who stayed inside the monastery during their visits. He embraced the Benedictine sense of welcoming all who came as Christ.

In his later years, Br. Mark often experienced severe pain in his legs and feet. Despite that, he continued serving his brothers generously in the community and through his devoted work with the Oremus program.

May he rest forever in the peace of Christ.