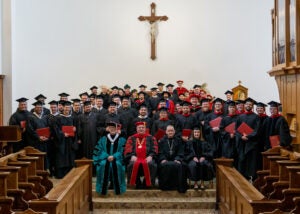 Mount Angel Seminary’s 33 graduates concluded the academic year with both the Baccalaureate Mass and Commencement Exercises celebrated on April 30 at 8 am and 10 am, respectively, in the Abbey church. In addition to graduates, many friends and family with smiling faces filled the church as a hopeful sign of better days ahead.

Bishop Peter Smith of the Archdiocese of Portland served as the principal celebrant for the Baccalaureate Mass, telling the graduates during the homily that they “have arrived at the starting line. Now the real race begins.” As the graduates processed into the Abbey church for Commencement, an organ fanfare echoed throughout the building, highlighting the exuberance of the day. Msgr. Joseph Betchart, president-rector, welcomed those gathered and led the invocation. In his address to the graduates, Msgr. Betschart encouraged the graduates to “open even wider the doors of your hearts to Jesus Christ.”

Deacon Adrian Sisneros, of the Archdiocese of Santa Fe, gave the Senior Farewell address. Referring to the original pioneer monks of Mount Angel Abbey, he spoke about the virtue of “holy grit,” which he described as “a noble and holy quality of character that will elevate us toward the heights of heaven.”

Before giving his blessing to conclude the Commencement Exercise, Abbot Jeremy Driscoll, O.S.B., chancellor of Mount Angel Seminary, offered some final lessons to the graduates from the life of St. Benedict, reminding them that “there’s a cloister in every heart and a stairway leads to heaven.”