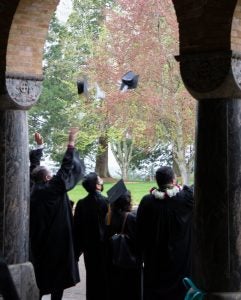 The 28 students of Mount Angel Seminary’s graduating class of 2021 ended the year with a Baccalaureate Mass in the Abbey church on April 23, followed by Commencement the following morning. “This was a year like no other” was a sentiment often heard throughout the two services.

President-Rector Msgr. Joseph Betschart, during the Commencement Exercises, commended the students and the entire seminary community for their “character, dedication, and commitment” in the face of innumerable challenges. “It’s certainly been a year full of challenges like no other. But it’s also been a year full of opportunities and graces like no other, as our Lord continues to guide us, sustain us, accompany us, and provide for us along the way.” He continued noting that throughout it all, he has never seen the community more joyful, more united together, more dedicated, focused, and committed, and make more growth than he has seen this year, which he said was a tremendous source of inspiration to him and to countless others.

As part of his Commencement Address, the Most Reverend Paul D. Etienne, Archbishop of Seattle, noted that the graduates are preparing to go “into a troubled world.” He advised them to “learn to live the many moments of tension” they would encounter. “Learn also,” he said, “that oftentimes tension is the playground of the Holy Spirit, out of which is born the creative solution that is necessary to build God’s kingdom.”
The Senior Farewell address was given by Deacon Cheeyoon Chun of the Diocese of Orange. “Regardless of how long we have resided here as students,” he said, “we came as guests, but this place will always remain our home. We shall make our descent down the 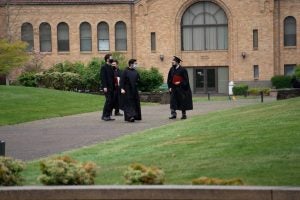 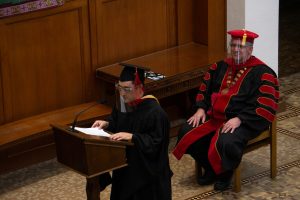 In closing the Commencement Exercises, the Right Reverend Jeremy Driscoll, O.S.B., Abbot and Chancellor, again acknowledged the challenging year this has been, noting that it was also “a wonderful time for growth. You showed yourselves able to rise to the occasion, again and again,” he told the graduates. “I congratulate you on that.” Quoting from the Apostle Paul, Abbot Jeremy offered his closing words: “Since you have been raised up in company with Christ, seek things above.”