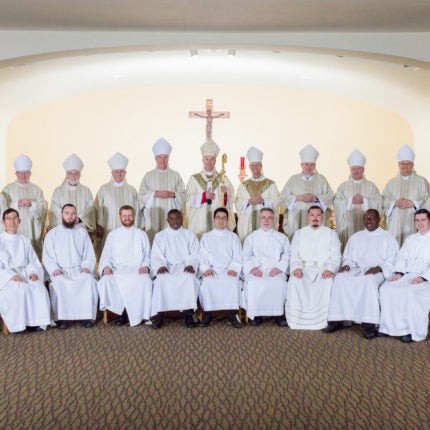 At a Mass on the morning of October 23 at Mount Angel Abbey, nine seminarians of Mount Angel Seminary were admitted to candidacy for Holy Orders by the Most Rev. Alexander Sample, Archbishop of Portland, who served as principal celebrant. The Rite of Admission to Candidacy for Holy Orders marks the point when the seminarian publicly declares his commitment to enter final preparation for service to the people of God as an ordained minister in the Church. Through the bishop, the Church accepts and publicly affirms the candidate’s commitment to continue on the path toward ordination.

In addition to the seminarians and the monastic community of Mount Angel, the Mass was attended by 36 bishops, religious superiors, and vocation directors who were present for the Mass and the Episcopal Council meeting that followed. Family members and guests of the candidates attended, as well as the entire seminary and monastic community of Mount Angel.
In his homily at the Mass, Archbishop Sample described the Rite of Candidacy as “a rite of passage that places you now in a different phase of preparation. You enter now into a phase of more intense preparation for ordination.”

Archbishop Sample reminded the entire community of seminarians that their best and primary preparation for priesthood is the loving relationship they must form with Jesus Christ. They must, he said, make their priority in life “your relationship with God, with Jesus Christ, in the Holy Spirit. There is nothing more important in your preparation [for priesthood] than that.”

Mount Angel Seminary, established in 1889 by the pioneer monks of Mount Angel Abbey, is the oldest and largest seminary in the western United States. It is the only seminary in the West that offers a four-year college and graduate school of theology, and one of only a few in the nation that offer degrees at all levels, baccalaureate through doctorate. Students experience exceptional academic instruction in a deeply spiritual, prayerful, and formative environment.