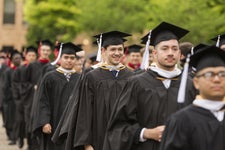 The students of Mount Angel Seminary’s graduating class of 2018 celebrated their Baccalaureate Mass on Friday afternoon, May 11, and Commencement exercises the following morning. Most Reverend Robert W. McElroy, Bishop of San Diego, presided at the Mass and gave the Commencement Address.

Speaking to the graduates and assembly gathered in Mount Angel Abbey’s church for Commencement, Bishop McElroy began his talk with the inspiring story of the 2015 free ascent of El Capitan by Kevin Jorgeson and Tommy Caldwell. The successful completion of the ascent was almost anti-climatic compared to the struggle of Jorgeson to conquer the 15th pitch and the steadfast accompaniment of his teammate, Caldwell, who refused to continue the ascent without his partner.

Caldwell, said Bishop McElroy, stayed with Jorgeson “even at the cost of sacrificing his own life’s dream.” He continued, “That example lies at the center of the formational experience which you have had here at Mount Angel. And it constitutes a pivotal foundation for the life of priesthood and all true service to the Church.”

Bishop McElroy reminded the graduates that Pope Francis has repeatedly called the entire Catholic faith community to accompaniment. Quoting Pope Francis, he said, “We need a Church capable of walking at peoples’ side, of doing more than simply listening.” Commencement, he said, “is not a moment of termination, but of new beginnings in a life of discipleship and service to the Gospel.”

In presenting the Senior Farewell, Reverend Mister Brent Crowe, from the Archdiocese of Portland in Oregon, noted that the commitment to accompaniment and letting oneself be open to discipleship can be a terrifying endeavor. He likened it to a young child on a roller coaster with his mother. The mother symbolizes the Holy Spirit and is filled with joy and laughter during the wild ride. The face of the young child, instead, is filled with terror and he is hanging on tightly to the support rail.

That young child, Deacon Crowe told his classmates, is “you.” Seminary life, at times, felt like that roller coaster ride. But in spite of having come from all walks of life and many diverse cultures, he and his classmates learned to accompany one another. “God,” he reminded his friends and fellow graduates, “writes straight with crooked lines.”

There were 38 in the 129th graduating class of Mount Angel Seminary, with a total of 52 degrees and certificates awarded, including 14 Bachelor of Arts degree; five Pre-Theology certificates; five Master of Arts (Philosophy); 10 Master of Divinity; eight Master of Arts (Theology); and six Baccalaureate in Sacred Theology.

Mount Angel Seminary, established by the pioneer monks of Mount Angel Abbey, began forming men for the priesthood in 1889. It’s the oldest and largest seminary in the western United States and the only seminary in the West that offers both a college and a graduate school of theology. Since its inception 128 years ago, Mount Angel Seminary has educated and formed thousands of priests for service to the people of God in nearly 100 dioceses and religious communities across the country and around the world.

On Tuesday, March 13th, students, faculty, staff, and guests of Mount Angel Seminary gathered in the Aquinas Dining Hall to celebrate the annual Annunciation Dinner. At the dinner, guests shared fellowship and honored particular members of the community for their contributions and achievements. The awards and their winners are listed below.

The Saint Benedict Award for outstanding progress in both graduate and undergraduate human formation was presented to graduate student Deacon Nathan Dail (Theology 4) of the Diocese of Boise, and joint awards for undergraduate students Ian Gaston (College 4) of the Diocese of Orange and Abundio Colazo Lopez (College 4) of the Diocese of Tucson. The award is given to those seminarians who best exemplify the highest formational ideals of the seminary, who model the Benedictine charism, who live the values of the Kingdom and actively proclaim the Good News, who love the Church, and who manifest servant-leadership in the seminary community.

The St. Anselm Award was awarded jointly to John DePalma (Pre-Theology 2) of the Archdiocese of Seattle and Sebastian Richardson (Pre-Theology 2) of the Archdiocese of Portland in Oregon, in recognition of those philosophy students whose love of learning, excellent academic record, appreciation of philosophy and the liberal arts, rigorous self-discipline, active classroom participation, and outstanding leadership ability have gained them the respect of the faculty and the admiration of their peers.

The Saint Thomas Aquinas Award for outstanding academic achievement from a theology student was presented jointly to Deacon Joseph Lustig (Theology 4) of the Diocese of Boise and Stephen Kenyon (Theology 3) of the Archdiocese of Portland in Oregon. This award is given in recognition of those students whose love of learning, excellent academic record, outstanding ability to articulate Catholic theology, rigorous scholarly research, active classroom participation, generosity with time and talent, and strong leadership ability have won the respect of the faculty and the admiration of students.

Deacon Brent Crowe (Theology 4) of the Archdiocese of Portland in Oregon, received the Saint Paul Award for outstanding progress in developing preaching skills. The award is based on the ability to proclaim the Word of God, call to conversion those who hear the Word, and the ability to possess a comfortable presence at the ambo.

The Saint Bonaventure Award for outstanding contribution from a faculty member was presented to Dr. Andrew Cummings, associate dean of the College of Liberal Arts and professor of philosophy at the seminary. The award is based on the ability to teach effectively and generosity with time and talent which have inspired students and won the praise of colleagues.

This year the Saint Michael the Archangel Award for special contributions to the seminary and its programs, was awarded to the Frassati Group. This award is given to a student or students, who have contributed significantly to the life of the seminary by establishing something new and beneficial or, through exceptional fidelity, commitment, creativity, and good will, have furthered something already established.

In honor of the Most Reverend Thomas Connolly (d. 2015), past Bishop of the Diocese of Baker, the Bishop Connolly prize is awarded in recognition of those seminarians whose submitted projects were recognized as commendable by the faculty. For his essay entitled “Liturgical Mysticism as the Path to Trinitarian Theosis”, the faculty awarded the graduate prize to Dominic Sternhagen (Pastoral Year) of the Diocese of Salt Lake City. For his essay entitled “‘Come, Lady, Die to Live’: Humility and Redemption in Much Ado About Nothing and King Lear”, the faculty awarded the undergraduate prize to Matthew Knight (College 4) from the Archdiocese of Portland in Oregon.

Mount Angel Seminary began forming men for the priesthood in 1889 and is now the oldest and largest seminary in the western United States, and the only seminary in the West that offers both a college and a graduate school of theology.  Since its inception 129 years ago, MAS has educated and formed thousands of priests, and many qualified religious and lay men and women as well, for service to the people of God in nearly 100 dioceses and religious communities across the country and around the world.

The church of Mount Angel Abbey reverberated with the sounds of the full seminary choir and pipe organ as 11 seminarians were admitted to Candidacy for Holy Orders on the morning of October 26, 2017.

The principal celebrant was the Most Rev. Alexander K. Sample of the Archdiocese of Portland in Oregon. Other concelebrants included the Rt. Rev. Jeremy Driscoll, O.S.B., Abbot of Mount Angel Abbey and Chancellor of the Seminary; Rev. Msgr. Joseph Betschart, President-Rector of Mount Angel Seminary; and members of the seminary faculty.

The Rite of Admission to Candidacy for Holy Orders is “a day of great joy,” said Archbishop Sample in his homily. The rite marks the point in each man’s vocational discernment when he publically declares his commitment to enter final preparation for service to the people of God as an ordained minister in the Church. The Church, through the bishop, accepts the candidate and publicly affirms the candidate’s acceptance to continue on the path toward ordination.

Mount Angel Seminary is the oldest and largest seminary in the western United States, established in 1889 at Mount Angel Abbey to form men for the priesthood. The Seminary serves both graduate and undergraduate seminarians from dioceses around the western United States, the Pacific Islands, and beyond, as well as students belonging to various religious communities and the lay faithful. 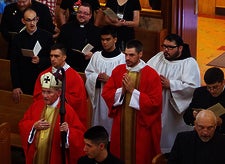